Concreter to paint over “pornographic” nude ad after watchdog ruling 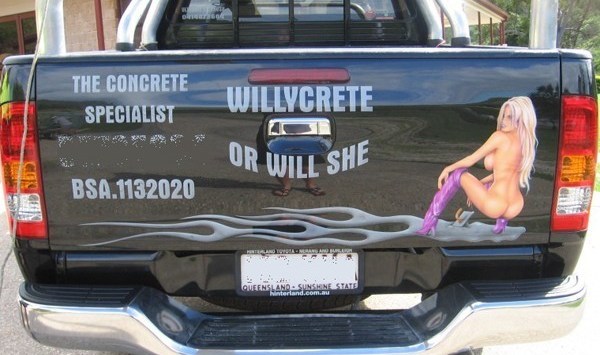 A concrete company in Queensland that has been ordered to remove advertising featuring a painting of a nude woman on the back of its work ute will “paint a bikini on her” instead.

The owner of Willycrete Concreters told SmartCompany his plan for appeasing the Advertising Standards Board after it upheld a complaint about the advertisement.

The ad, which depicts a painted naked woman wearing pink high-heeled boots squatting down and looking over her shoulder, includes the tagline “Willycrete or will she”.

A complaint submitted to the ad watchdog indicated the complainant had concerns the image was pornographic.

“This is pornographic and totally unsuitable for children to be exposed to,” the submission read.

“It was not possible to avoid having this in my face as I was travelling on a single lane mountain road with double lines all the way until I turned off at my home.”

The company responded by first explaining the business name Willycrete was a combination of owner Paul William’s nickname and “crete – which is short for concrete”.

“We decided we needed a catchy phrase and logo to promote our business in order to be competitive in a very competitive market,” the company said.

“We admit that the picture of a women is a bit risqué but it is in no way meant to offend or to be degrading to women in general.”

But the board found the ad was offensive and degrading to women and not suitable for viewing by children, while it could find no link between the marketing of the naked woman and the business.

“The Board noted that in the current advertisement the image of the woman does show her holding a concreting trowel but there is no relevance between a naked woman and concreting services,” it reads.

“The Board noted that the image is a lifelike drawing and that the woman is posed with her naked back and bottom visible and the side of her breast. The woman is wearing knee length high heeled boots.”

“The Board considered that the woman‘s position is sexualised and that the length and style of her shoes being the only item of clothing increases the sexualised nature of the image.”

Overall, the board considered that the advertisement did not treat the issue of sex, sexuality and nudity with sensitivity to the relevant audience.

Willycrete Concreters owner Paul Williams told SmartCompany he doesn’t agree with board’s decision but will modify the ad within a month.

“We’re not removing it, we’ll paint a bikini on her,” he says.

“I don’t understand how one person can put in a complaint about our ute and this happen, we’ve never had one person say anything in eight years.

“It’s not provocative at all; it’s a painting, it’s not nudity, you can’t see nothing.

“Their ruling is that it’s degrading.”

Michelle Gamble, founder of Marketing Angels, told SmartCompany the concreter should “stick to concreting and not try and do marketing”.

“Women make decisions about concreting and contracting too.”

Gamble believes the strategy might have been to appeal to other tradies, as potential subcontractors of the business, but says Willycrete Concreters should not assume all tradies are “low brow”.

“Tradies deal with other tradies to get work, it’s incredibly male-dominated,” she says.

“It is pornography, it is degrading.”

She says the lessons for other small businesses are to ask people what they think about such marketing.

“Don’t use naked women in ads, and don’t assume that that’s the kind of thing that would appeal to your target market either,” she says.

“There’s much better ways of going about it.”