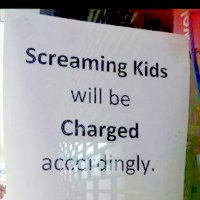 An Adelaide hairdresser has come under fire for a displaying a sign that told customers their “Screaming kids will be charged accordingly” for the cost of a haircut.

The company then defended the stance, saying on its Facebook page that cutting children’s hair can be “nerve racking, scary and overwhelming”.

The uproar comes in the wake of a string of criticism recently thrown at businesses on Facebook, over its advertising and products.

The sign was displayed in the window of the Jaggered Edge Hair and Beauty salon in Salisbury Downs for a fortnight until a war of words erupted on Facebook on June 7, reports the Adelaide Advertiser.

Commenters said the sign discriminated against children with autism.

“So I heard you have a sign up that says screaming kids will be charged more apparently,” said the original commenter. “Here is a tip for you, free of charge, do some research on autism spectrum disorder and sensory processing disorder.”

A flood of criticism then followed with commenters calling the sign “absolutely disgusting” and warning the salon “consumer affairs will jump down your throats”.

The sign was removed, but Jaggered Edge posted a statement justifying it and asking its customers to “understand this sign from a hairdresser’s point of view”.

“I would like everyone to know we cut a lot of kids hair with special needs, some of our stylists have even travelled out to houses to cut their hair because it is more comforting for the child,” read the post. “This sign is not aimed at special needs children at all.”

“It is so nerve racking, scary and overwhelming almost sickening for the stylist trying to cut a screaming kids’ hair,” said Jaggered Edge. “You almost feel sick to the stomach that the child is going to move and you are going to clip their ear or cut their skin.”

“We most certainly did not aim to discriminate or offend anyone.”

Jaggered Edge was contacted by SmartCompany, but did not receive a response prior to publication.

Tom Godfrey, spokesperson for consumer advocacy group Choice, told SmartCompany the best thing a customer can do if a service provider asks them to pay an extra fee is go elsewhere.

“They have to tell you the total price of the haircut before they start cutting,” says Godfrey.

“If they decide to try and charge more after they’ve started, you’re well within your rights not to [pay the surcharge]. Screaming kids don’t come with a premium,” he says.

Godfrey says if a hairdresser was to tell a customer their haircut would cost extra, they would have to do so well in advance of starting the service and let the customer know how much extra it would be, preferably in writing.