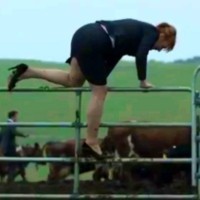 Devondale has dodged any action by the Advertising Standards Bureau over an ad viewers deemed “sexist”, after the watchdog had weeks earlier upheld a complaint about a similar ad considered to be “racist”.

The ad by Murray Goulburn, parent company of milk brand Devondale, features a woman in a business suit and high heels struggling to climb over a fence on the farm.

Two men in suits are seen in the background trying to herd some cattle, while the voice over states “some businesses have no business making your milk”.

The ad watchdog previously upheld a complaint against another ad from the same campaign, which featured an Asian man attempting to herd cattle.

While it was found the first ad had vilified a man of Asian background and the Asian business community more generally, the watchdog dismissed the idea the second ad discriminated against women.

Murray Goulburn argued the campaign was intending to illustrate what happens when “corporate executives attempt to run a dairy farm”.

The viewer who complained against the ad said the implication of the campaign was that Murray Goulburn was better suited to only employ male Australian farmers.

“I object to this campaign because it is sexist. Are Murray Goulburn really trying to suggest they have no women in business suits are employed in their milk company?” said the complainant.

But Murray Goulburn defended the ad by saying it wants to represent a range of ages, genders and appearances, to reflect the diversity of contemporary corporate Australia.

“Each character in the ads is equally incompetent at his or her farming tasks – clearly these people’s experience lies in an office environment, not on a farm,” the company says.

The Advertising Standards Board noted that in its previous ruling it found “the advertisement delivers a negative suggestion that people of Asian background are not capable of farming and that the portrayal of the man in this way is demeaning”.

But in contrast, the Board agreed the second ad merely showed a woman climbing a fence dressed inappropriately for the activity.

“The Board considered that the overall impression was not negatively suggesting that the woman wasn’t capable of farming but clearly identified that the outfit she was wearing was completely inappropriate for the environment she was in and that the comical nature of the advertisement was evident,” said the watchdog.

It subsequently dismissed the complaint.

Dr Danielle Chmielewski-Raimondo, a marketing academic from the University of Melbourne, told SmartCompany brands need to be very careful when it comes to representing cultural and gender stereotypes.

“I think sometimes brands try hard to be clever, but what seems like a good idea on paper might not translate that way,” says Chmielewski-Raimondo.

Chmielewski-Raimondo says the diary is industry is very competitive and Devondale has been trying to push an image of its connection to local farmers.

“Their earlier ads were very clever,” she says, referring to a campaign from last year where people pulled ‘disgusted’ faces after drinking soy milk.

“But it sounds like they haven’t managed to produce a clear message here.”

SmartCompany contacted Murray Goulburn but the company declined to comment.