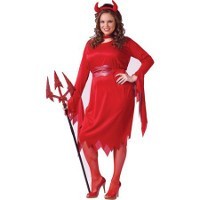 US retail giant Walmart has come under fire for devoting a section of its online store to “fat girl costumes” for Halloween.

This appeared to be an ill-advised move to target the plus size market.

Even as “fat girl costumes” hit the top 10 Twitter trends in the United States the website section remained up and Walmart sent auto responses to complaints via social media reading “your comments and suggestions are important to us and help make Walmart even better. Thank you.”

Fat girl costumes? and @Walmart will be issuing an apology in 3, 2, ….. #EPICFAIL pic.twitter.com/NI8EjSFR9F

But Inc reports Walmart followed one mistake with another, replacing the “fat girl costumes” section with “Women’s Plus Size Halloween Costumes” with a banner at the top of the page: “Make it a monstrously big Halloween for less.”

Walmart then moved to apologise, saying: “This never should have been on our site in the first place. It’s unacceptable that it appeared, and we apologize.”

“Something like this in an earlier era could be quickly remedied before, but a furore can now become global news in a single screenshot,” she says.

Rosewarne says businesses need to be very vigilant about language in our hyper -sensitive and outrage-prone culture.

“It shows how powerful a word like ‘fat’ is in our culture and yet how apparently – if strangely safe – ‘plus-size’ is as a descriptor,” she says.

“We are a culture that is most comfortable with euphemisms.”

Michelle Gamble, chief executive of Marketing Angels, says Walmart should not have a label on this section of the website and should just offer the larger sizes.

“You only see this sort of stuff as it relates to women, I’m sure they don’t have fat man costumes,” he says.

“It’s part of the objectification of women in the media and is a sad reflection in terms of where we are in society.”

Gamble says Walmart did the right thing by apologising but didn’t need to make a distinction between this range of costumes and other costumes.

“[The term] ‘fat girl’ is quite sexist as well as being offensive to people who are larger,” she says.

“I would think it’s more normal in the States to be of larger size, so they are potentially alienating a lot of their target market.”