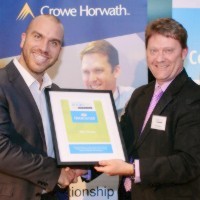 Successful marketing is all about finding an idea that really cuts through.

We asked the businesses in this year’s Smart50 about the marketing strategies that worked for them in the past year. Here are five of the best ideas which are a little out of left field. Would they work in your business?

The way the campaign works is customers providing a referral get $25 credit and their friend also gets $25.

“But it only works, because we’ve focused on getting our product right, and people WANT to tell their friends about us,” say Vinomofo founder Andre Eikmeier.

Next on the list for Vinomofo is the “Vinobomb” campaign which encourages “random acts of Mofo kindness”.

Customers nominate a business, or a friend, or someone who’s done something worthy, for a Vinobomb, and a six pack of wine in a branded wooden box will arrive, via an Uber taxi, on a Friday afternoon.

“Our Facebook page audience is incredibly engaged and we have learnt what the community likes to read about and we’ve generated some incredible success stories,” says Luc Pettett, founder of Punters.com.au

One of the biggest success stories was Punters.com.au’s April Fools gag about the successful cloning of Black Caviar.

“It was a Facebook hit with a reach of 384,000 users and it was written up as one of the best April Fools day gags in the media,” Pettett says.

“Since then, we’ve had a couple of posts that have reached 1.2 million people.”

Adore Beauty hasn’t had to pay for any advertising to promote its successful twice annual VIP shopping event.

The event is promoted through email marketing and social media only twice a year.

Kate Morris, founder of Adore Beauty, kicks off the campaign with a “save the date” email to Adore Beauty’s email data base.

Three days later, the event launches with an email to the same recipients, giving them access to a landing page with the promotions and promo codes on offer, including 15% off full-priced stock and over 35 ‘gift with purchase’ offers from its most successful brands.

Customers who shop during the VIP period are invited to enter a “lucky dip” competition on Facebook: by entering their order number, they can win a free product to be added to their order.

Something as simple as emailing your customers to ask if they are happy can become a successful marketing campaign, according to Oz Trampolines founder Richard Haby.

Oz Trampolines emails all customers to ask if they are happy three months after purchase.

If they are, the customers are then asked if they would mind writing a product review.

If the customers aren’t happy, they are then asked what can be done to help them.

Oz Trampolines then has a widget on its website which shows the last four reviews and customers can click to see more.

“My theory is that if people are going to spend $300-$900 on a trampoline they will do their research and ensure the company and product is worthy of the price, especially as they are purchasing online and not walking into a physical store,” Haby says.

Hudson, who describes himself as the “Steve Irwin of fitness”, has a television show called Fit’N’Flexed.

“We took a leap of faith with Dayne last year and sponsored series one which was aired originally on Foxtel,” co-founder Nigel Miller says.

The show has since been picked up by the Ten Network, which has run series one and also commissioned a second series.

The second series of Fit’N’Flexed will go to air in November with the majority of segments filmed inside a Plus Fitness and all interviews conducted outside of a Plus Fitness containing product placement.

“The relationship developed here and the integration and cross-promotion with both of our and Fit’N’Flexed social media platforms have had a very positive impact on our brand exposure,” Miller says.