“Get your hands on the good stuff”: Naked man soap-on-a-rope ad not so dope for The Body Shop 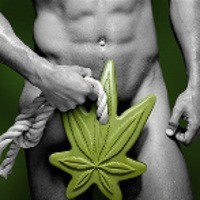 Is this Body Shop ad campaign daring or just dopey?

The Body Shop is facing pressure on a number of fronts to drop the latest advertising campaign for its hemp-based skincare products, with social media users and activist group Collective Shout calling out the retailer’s use of an image of a naked man holding an oversized piece of soap in the shape of a hemp leaf.

But one advertising expert says the criticism is just an example of the ongoing “conservative backlash” against advertising that may test some boundaries.

The Body Shop unveiled the campaign for its hemp-based range earlier this month, with in-store posters and banner advertising on its website featuring the torso of a naked man strategically holding an oversized hemp-shaped piece of shop attached to a rope, with the tagline: “Get your hands on the good stuff.”

The Herald Sun reports a Melbourne woman who saw the ad in the Knox shopping centre complained directly to The Body Shop, while also contacting Collective Shout, an activist group that campaigns about overly sexualised advertising. The woman said the image distressed her foster daughter by triggering memories of past sexual abuse.

But the image has also drawn criticism from members of the public, who have taken to The Body Shop’s Facebook page to complain.

“I am appalled by this marketing campaign and I believe it goes against several of your companies [sic] values like protecting self esteem, reducing body issues, protecting the planet (and it’s people) and being sensitive to ethical and moral issues,” said one Facebook commenter.

“So disappointed today when I saw this at Westfield Helensvale,” said another.

“Your store normally provides such a beautiful shopping experience so it’s a shame you have resorted to such distasteful and disrespectful advertising imagery. Bring back the love, peace, caring and sensitivity that The Body Shop is known for.”

The Body Shop responded to the Facebook comments by thanking people for “taking the time to submit your passionate comments”.

“The world is made better by all different types of view points and we’re pleased to have inspired discussion,” the company said.

“The Body Shop was founded in 1976 as an original, naturally inspiring beauty brand. Our Hemp range was launched in 1998 [and] caused wide spread controversy in the press yet 16 years later, due to the efficaciousness of the ingredient, Hemp Hand Protector is our number 1 best-selling product.”

“Our communication has always been different, provocative, plain talking and irreverent. That’s our personality as a brand.”

But not all Facebook commenters slammed the image, with several people praising the ad and saying it reminded them of Anita Roddick, who founded The Body Shop in 1976.

“This is The Body Shop of the past – daring, provocative, creative and bit tongue in cheek … sometimes controversial but NEVER BORING,” said one commenter.

“Very clever marketing and a great way to live out the values and what Anita lived for,” said another.

In a statement issued to SmartCompany this morning, The Body Shop said the campaign “is meant to be tongue-in-cheek and thought-provoking and irreverent, similar to other advertising campaigns the brand has done previously”.

The Body Shop says it has also “been a force for positive social and environmental change” through a number of international campaigns, including its Stop Violence in the Home campaign in 2008 and the Stop Sex Trafficking of Children and Young People campaign between 2009 and 2011.

Melbourne University senior lecturer Lauren Rosewarne, an expert on sexuality in advertising, told SmartCompany she was surprised to see the backlash against the image, which mimics Renaissance art.

Rather than the ad being offensive, Rosewarne says the complaints are another sign of a “conservative backlash” against advertisers.

“There’s nothing new here,” she says.

While some Australian businesses that choose to promote their products with nudity have recently been the subject of complaints to the Advertising Standards Board, Rosewarne says advertisers should not necessarily be deterred from this form of advertising.

“Businesses have to work out who their target audience is and who they are trying to capture,” Rosewarne says.

“If the types of people who send in complaints are not your target audience, then you can continue as you are.”

Rosewarne says complaining about an ad or a business has become “so easy to do now” and this presents both an opportunity and risk for advertisers.

“It’s great because companies can test ads very quickly now and see an immediate consumer response but the flipside is a number of complaints can distort public perception,” she says.