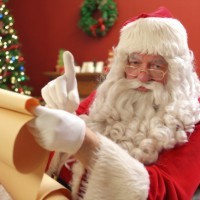 Lingerie brand Honey Birdette has removed advertising material in three of its stores after the advertising watchdog upheld complaints over the Christmas ads that featured a lingerie-clad woman leaning on the knee of a gagged Santa.

The two images appeared in shop windows at Honey Birdette stores in shopping centres at Rundle Mall, Charlestown and Chermside.

This is not the first time Honey Birdette has come under fire for provocative advertising campaigns, with the retailer previously copping criticism for a poster of a woman in lingerie with the text: “Sgt Pepper. Earn your stripes”.

In the latest incident, complaints received by the Advertising Standards Board related to claims of discrimination, the objectification and degrading of women, violence and general use of sexuality and nudity.

Complainants also took issue with the placement of the ads, which were visible to shoppers walking past the stores.

“The ad uses an easily recognisable childhood icon – Santa Claus – to draw attention to advertising for a sex shop which masquerades as a high end lingerie shop,” one of the complaints received by the Ad Standards Board.

“People of all ages walk past this store in Westfield Shopping centres, the image of Santa Claus is sure to draw attention to children who happen to walk past and therefore the sexualised advertising depicted along with the image.”

The first ad featured a woman in red lingerie standing over a Santa Claus figure who is lying prone on the floor at her feet, with the text “Knock Santa’s socks off!”.

This was found to not breach the advertising industry’s code, even though the Ad Standards Board found the inclusion of Santa was likely to catch the attention of children, the board deemed the level of nudity in the ad “relatively mild”.

However, the second advertisement was found to be in breach of the code. This image featured a woman in red lingerie standing with her bent knee resting on Santa’s lap, while Santa had a red gag over his mouth. The image was accompanied by the text “Silent Night…”.

The Ad Standards Board said the bondage of Santa coupled with the lingerie clad woman standing over him could be perceived as sexual violence.

Additionally, the advertising watchdog ruled the large store front advertisement was not sensitive to the broad audience – including children and families – in shopping centres.

Honey Birdette responded to the board’s decision by declaring the overall campaign as “very well received”.

“During this Christmas period we experienced our strongest sales ever. The two lingerie sets that were displayed in the signage had one of the highest rate of sale that we have seen.”

The retailer also confirmed the posters have been removed from the three stores.

“All of the stores are receiving new signage today. The image will no longer be visible,” the company said.

However, a short clip of the same campaign is still available via the Honey Birdette YouTube channel.

Dr Lauren Rosewarne, an advertising expert and senior lecturer at Melbourne University told SmartCompany, a large portion of complaints received by the Ad Standards Board deal with sex in advertising.

“Sex and sexuality are areas flagged in the advertising code of ethics. These are areas that garner lots of complaints each year and are areas where companies need to be careful,” she says.

Rosewarne says SMEs need to be careful when contemplating a sexy angle for their next marketing campaign.

“Going with a sexy campaign might be easy but to avoid offence – and to potentially also benefit from a larger audience – avoiding salacious imagery and instead being funny or clever is likely to win more fans and also avoid trouble and bad publicity,” she says.

SmartCompany contacted Honey Birdette but did not receive a response prior to publication.