How Pokémon GO could boost sales to your business 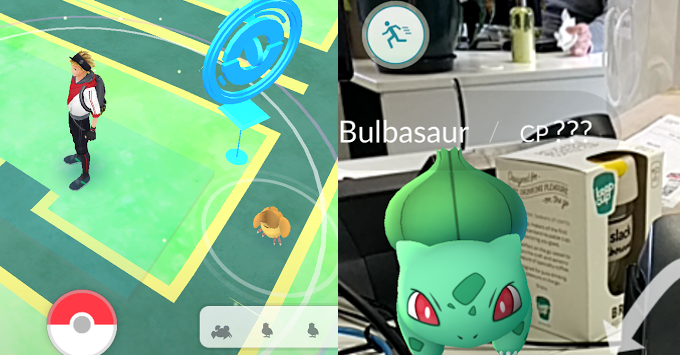 On the left, my character with a Pokestop nearby (blue circle). On the right, a Bulbasaur I caught in the office.

If you’ve been witnessing quite a few people walking around glued to their phones – more than normal that is – it might be due to a popular new game called Pokémon GO.

The game allows users to venture into the real world with their smartphones to find small digital creatures known as Pokémon, capture them and battle with them against other players.

The game uses an actual scale map system, meaning that users could be alerted to catchable Pokémon in a different suburb, and must travel there if they wish to catch them all. Currently, the game’s objective is to get your Pokémon to a high power level, and defeat ‘gyms’ – places where you can battle against similarly levelled Pokémon.

The original Pokemon game was released in 1995 for the Gameboy game system, and has been massively popular since then, spawning more than 40 different sequels and spinoffs.

This phenomenon is sweeping the world faster than anticipated, being installed on 5.16% of Android devices in the US (approximately 6 million devices) after being released for only five days. Nintendo, the games company who hold the rights to the Pokémon series, have seen a massive uptick in stock prices, rising by over 20% after the apps release.

As exciting as this new release might be, a surprising outcome of the apps release is the reaction from businesses around the world as they’ve found keen Pokémon hunters suddenly in their stores. Pokémon can appear anywhere, regardless of altitude or building presence, which has lead to some happy and unhappy owners.

Reddit user Chaos17 posted an image two days ago of a Dairy Queen in America, which had gotten so fed up with the amount of keen Pokéhunters in their store that they posted a sign about it.

Some employers are also having to warn staff about playing the game while at work.

On the other hand, Utah indie clothes store IconoCLAD encouraged users into their store with a colourful sign stating, “Come get your Pokéballs and previously rocked threads! Gotta catch them all – in style!”

A ‘Pokéstop’ is a location built into the game where users can go to refill on Pokéballs (the tools used to catch Pokémon) and find other players to battle. There are also often a number of rare Pokémon commonly found at Pokéstops.

An American Museum of Art, Crystal Bridges, found that a number of Pokémon were scattered around the museum and grounds. It quickly took to its blog to alert keen hunters to the Poképresence, and advertised some of the art on offer at the same time.

“Pikachu, for instance, hangs out around Dan Flavin’s light installation Untitled (to Mr. and Mrs. Thomas Inch). That’s not surprising, as Pikachu’s an electric Pokémon and this is an electric artwork,” the museum said.

For businesses that are not benefiting from naturally occurring Pokétraffic, there are other opportunities to attract users of the app into your stores. One of the items available for purchase in the game is a ‘lure module’.

Lure modules attract Pokémon to a particular Pokéstop for 30 minutes, and it will affect the area around a Pokéstop too of approximately a 500 metre radius. If your business falls within those bounds, purchasing a Lure Module during some of your downtime might just increase your Pokésales and maybe net you some Pokéreturningcustomers.

This is such an awesome opportunity for some retailers. It seems like the smaller retailers have jumped on board very quickly while the larger ones might still be scratching their heads trying to figure this out.
In Canberra there’s a PokeWalk this weekend for those interested. Apparently the organiser has already contacted the police to let them know what’s happening.