How you ask is as important as what you ask

A friend recently shared with me a clip from the classic UK comedy, Yes Prime Minister.

Two bureaucrats, Sir Humphrey Appleby and Bernard Woolley are discussing the results of an opinion survey. Bernard is concerned that the survey showed people to be in favour of reintroducing National Service (military conscription), and that the Prime Minister thinks such a policy would win him votes. Sir Humphrey is alarmed.

But not to worry. Sir Humphrey then demonstrates to Bernard the ease with which opinion polls can be manipulated to derive the opposite result.

All you have to do is frame the question in a different way.

There are some big questions being asked

Questions have been in the spotlight recently.

We are right in the midst of the fallout from Britain’s “Brexit” referendum where people voted to leave rather than stay in the European Union.

Earlier this year New Zealand voted to retain its existing flag rather than adopt a new design.

The Republic of Ireland voted for marriage equality, with 62% of voters answering yes to the question about whether to add to the Constitution “marriage may be contracted in accordance with law by two persons without distinction as to their sex”.

It’s a big year in electoral questions too, with voters in Australia and the US being asked who they want to run their country.

As Sir Humphrey demonstrated, how you ask a question is as important as what the question is. In behavioural terms we’re talking about the “framing effect”.

In public policy the rate of acceptance can depend on whether something is called “Marriage Equality’ or “Gay Marriage”, or a “Carbon tax” rather than “Polluter’s tax”.

Here’s an example from the business world. Imagine you are an employer who is facing a bleak prospect. You may have to retrench as many as 600 staff. However, there are still two options you can try.

Which option do you take?

Does it surprise you that when I’ve asked workshop participants this very question as many as 75% have opted for Option A, and only 25% for Option B?

Well, I should say half the group have answered 75%/25% because unbeknownst to them, the other half got the same question but it was framed slightly differently.

The scenario is the same. You are still an employer who is facing a bleak prospect and may have to retrench as many as 600 staff. There are still two options you can try.

However, this time the wording is slightly different:

Does that change your answer?

It shouldn’t. The scenario is exactly the same and the results are too.

Here’s another example from market researcher Ipsos-Mori, which was surveying people on whether to change the voting age: 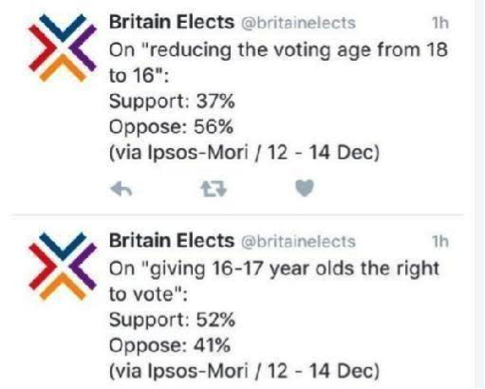 How will you ask your customer to take action?

The impact of how you phrase a question means you need to be very careful when putting it to your customer.

Framing means that if you commission market research (and assuming you want the truth rather than evidence to support your decision), you should ask the reverse question too e.g. I believe in fairies, I do not believe in fairies. The same goes for staff satisfaction surveys.

Better yet, rather than relying self-reported answers, set up experiments and observe how your customers react (more on why you shouldn’t rely on what customers tell you here).

Framing is critical to your marketing effectiveness. For example:

For more on framing you might be interested in my new book Behavioural Economics for Business which will be released in a few short weeks.