“It’s better to be late, than to arrive ugly”: Hoyts forced to pull slogan after social media backlash 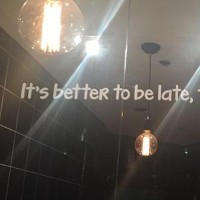 The offending slogan photographed by Amelia Lush in the Hoyts toilets

The Hoyts corporation has withdrawn an advertising slogan that appeared in one of its Sydney cinemas, after social media users slammed the cinema company for telling women “it’s better to be late, than to arrive ugly”.

Sydneysider Amelia Lush first saw the slogan in the female bathroom in the Lux section of Hoyts Broadway in January but chose to take a photo of the ad and tweet it over the Easter weekend when she noticed it was still up.

The words “It’s better to be late, than to arrive ugly” were printed on the bathroom mirror and in her initial tweet on Friday, April 3, Lush told Hoyts “this is exactly the wrong message to be sending young girls and teens visiting your bathrooms”.

Hey @HoytsAustralia, this is exactly the wrong message to be sending young girls & teens visiting your bathrooms pic.twitter.com/HThVaAYTpS

Hoyts responded to Lush within three minutes to thank Lush for “sharing your feedback with us”.

But other Twitter users quickly responded to Lush’s initial tweet, which to date has been retweeted 406 times and favourited 209 times.

Hoyts responded again two hours later to say the Hoyts team had “listened” to Lush’s feedback and hopes to assure her “no offence was intended”. The company said the artwork would be removed.

Another Twitter user Moriah McIlwraith then responded to Lush on April 6 confirming the artwork had been removed on April 4.

But Lush told SmartCompany this morning despite Hoyts’ quick response, she was “frustrated” by the language the company used, which she says suggested Hoyts was sorry she was personally offended but not sorry the statement itself was offensive.

Lush also expected Hoyts to contact her personally to discuss the matter further.

“I expected to receive a direct message on Tuesday, especially because of all the retweets and the impressions [of the photo] went through the roof,” says Lush, who says she didn’t expect another message from Hoyts until after the long weekend.

“I thought it would have been par for the course for such a large company. But what you can see is all I got. I genuinely thought come Tuesday by lunchtime I would have had something further.”

Lush says it was immediately apparent to her when she first saw the slogan that it was part of a marketing campaign by Hoyts, saying an image of a woman wearing a hat, which is part of the Hoyts branding for its Lux cinemas, appeared close to the slogan as well as in other parts of the cinema, including signage to indicate where the toilets are. She says the text was also clearly “professionally put up”.

This leads Lush to believe the same slogan could have also appeared at bathrooms at other Hoyts cinemas.

SmartCompany contacted Hoyts but did not receive a response prior to publication.

Lush admits she thought twice about calling Hoyts out in the “public forum” of social media, but says she is “astonished” that such a slogan could be approved within a company of Hoyts’ size, especially given there is currently “so much dialogue about the language we use around women”.

And she says the issue with the slogan is not just about women.

“Hoyts is a family establishment, it’s not a bar, it is more frequented by teenagers and families than many, many other places,” she says.

“They have a responsibility in what they communicate … it is perpetuating an idea that we are trying to get away from, that what you are worth is in how you look and nothing else.”

Lush says she has no problem with Hoyts using its bathroom mirrors for advertising and says the cinema chain in fact missed out on a “wonderful opportunity to put up something empowering” for its customers that use the facilities.