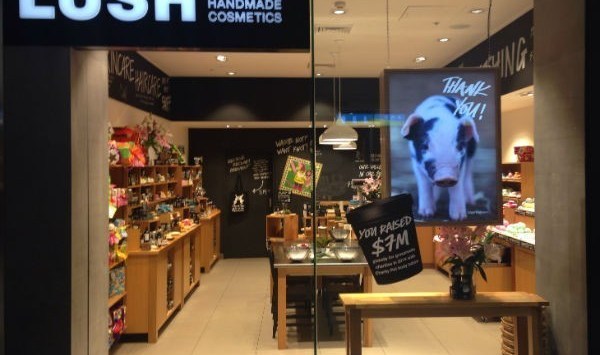 Lush Australia will not change how it approaches marketing despite a decision by the Advertising Standards Board to uphold a complaint against the homemade cosmetics brand’s campaign to raise awareness of excess packaging that featured nude women.

During August and September this year, Lush began a campaign against excessive packaging in the cosmetics industry by highlighting how many of its products are “naked”, or unpackaged.

As part of the campaign, Lush placed posters in its shop windows that featured nude women of diverse shapes and skin tones with their back turned to the camera.

The words “We prefer to go naked like over 100 of our products” accompanied the advertisement.

However, the Advertising Standards Board has now ruled the image was not in line with community expectations, despite the watchdog admitting the ad was not sexually explicit.

One person complained to the advertising watchdog, saying the image was “pornographic” and they were unable to “shield” their children from the poster.

The advertising watchdog noted that while the image did not have the same “sexual nature” referred to in the complaint, as the poster was visible from the store windows this meant it could be seen by children walking through a shopping centre.

Because of this, the board ruled the ad did not treat nudity with sensitivity to a relevant and broad audience, which includes children.

“The full body images and the fact that there are four women rather than an individual meant that the overall impact was increased and was confronting,” the board said.

SmartCompany understands that if the image had contained just one or two images of women’s bottoms, the advertising watchdog would have sided with Lush.

In its decision regarding the Lush advertisement, the board noted that it had previously dismissed a complaint about an ad that depicted a single man’s “intergluteal cleft”.

While Lush has stopped using the image in its marketing material, Peta Granger, director of Lush Australia, told SmartCompany this morning the Ad Standards Board’s ruling will “in no way” affect the company’s branding moving forward.

“All of us who work for Lush were incredibly proud to stand by this campaign and we’ll continue to address excess packaging and promote body positivity with our staff, customers and the public in a similar way,” Granger says.

“We received a handful of complaints internally, which is pretty tiny compared to the thousands of message of support, praise and ‘likes’ from parents, teachers and retailers – let alone the hundreds of thousands of people who walked past our 39 windows over the three-week campaign.”

Melbourne University senior lecturer Dr Lauren Rosewarne, an expert of gender and discrimination issues, told SmartCompany businesses such as Lush should be praised for their different approach to advertising.

“While personally I think the ad is great because it showcases diverse female bodies in a manner that resists sexualising them or making them passive, the very reason the image was selected is also the reason why the image is problematic with display in public space,” Rosewarne says.

“It still manages to be a little shocking. We are not a culture in complete acceptance of nudity and thus advertisers need to err on the side of caution for fear of offending conservative audience members.”

“It is, however, worth wondering whether the same number of complaints would have been received had stereotypical ‘perfect’ bodies been used.”