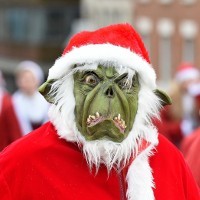 US toy giant Mattel has been labelled a “Christmas Grinch” by a South Australian MP over its “sneaky” letters to Santa website, which encourages kids to add toys to a Christmas wish list and then email it to parents.

Labor backbencher Chris Picton made the comments in State Parliament last week and told SmartCompany this morning a campaign to remove the site has since received strong support.

Picton says he saw the website and became concerned about the way Mattel was directly marketing to children without indicating it was a marketing campaign.

“The more you look into, the more misleading and deceptive it is,” says Picton.

“It presents itself as Santa’s real website and unsuspecting children, most of who would be very young, are only given options available for Mattel products.”

Children are encouraged to log on to yourlettertosanta.com.au and choose up to 15 toys from Mattel products, such as Barbies and Hot Wheel cars. Parents are then sent an email saying: “Don’t be late – see what [Your child] would most love for Christmas now! View letter now” with direct links to buy each toy.

“But I would encourage Mattel to stop being a Christmas Grinch and voluntarily show some good Christmas spirit and either remove their sneaky website, or make it completely open for children to write letters to Santa without pushing Mattel products down their throats,” he said in an address to parliament.

But Brandology chief executive Michel Hogan says Mattel is not the only company to use children’s letters to Santa in their marketing campaigns.

Hogan says Christmas has long been commercialised and any number of companies try to capitalise on this through their campaigns.

“It’s a Mattel site, they’re marketing what they are selling and I’d be surprised if they didn’t have ads like this,” she says.

“They are there to sell their products. They’ve come up with this way to do it, but it’s no different to an ad in a magazine.”

Hogan says parents have the right to ignore the site and encourage their children not to visit it.

“Be the grown up and control the child’s actions, it’s not the corporation’s job to do that.”

But Picton says he is not upset that Mattel is marketing to children, but concerned with the deceptive nature of that marketing.

“I don’t have a problem with Mattel marketing to children, but this is an attempt to deliberately deceive children,” he says.