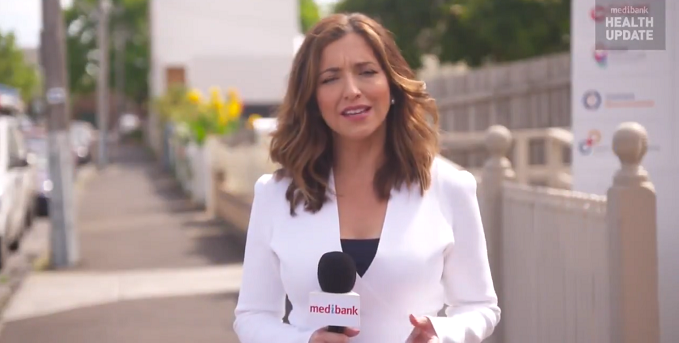 Health insurer Medibank Private has amended one of its advertisements after being slapped on the wrist by the Ad Standards Board for allegedly trying to pass marketing off as news.

In a TV ad aired immediately after a segment of Channel 7 news, Medibank ran a “health update” starring former Channel 7 journalist Mia Greves, who now works as a communications manager for the insurer.

The one-minute “health update” mimicked the format of a TV news bulletin, complete with a piece to camera and a Channel 7 news ticker on the bottom of the screen with information about upcoming stories.

The Ad Standards Board said the ad featured an interview with psychologist Michael Carr-Gregg, who has previously been interviewed for other TV news stories and infographics presented with a voice-over, typical of broadcast news packages.

“For Medibank, I’m Mia Greves bringing you the latest in health news,” Greves said as the ad neared its end.

The complainant alleged Medibank “deliberately” tried to pass the ad off for a news bulletin, topping things off with a subsequent ad which spruiked the insurer with customer testimonials.

“This advertorial was designed to masquerade as a news article by using the Channel 7 logo lower thirds chyron,” they said.

Medibank argued the ad was clearly commercial and the use of the news ticker underneath the original ad was not out of the ordinary during a news bulletin.

One of Medibank’s Health Update ads:

1 in 4 Australians experiences low back pain on any given day. We look at how we can find #relief: https://t.co/TdvLtCtYA5 #backpain pic.twitter.com/YSQLpDlCkG

But the Ad Standards board upheld the complaint, finding the advertisement was “not clearly distinguishable” to Channel 7’s audience.

“The panel considered that technically the branding elements may be recognizable as an advertisement to some viewers but in the panel’s view it was not clearly distinguishable to a broad audience of news viewers,” it said.

Medibank has since amended the ad, including a “this is a paid advertisement” disclaimer and asking Seven to modify its news ticker during the airing of the commercial so it refers to “After the Break” rather than “Up Next”.

Medibank has produced a series of the “health update” ads, utilising Greves’ news skills to present the abnormally long commercials in the style of commercial news packages.

In a statement, a Medibank spokesperson said the insurer “takes the complaint seriously”.

“When a viewer raised some concerns about the Medibank Health Updates, we immediately made proactive changes including adding ‘This is a paid advertisement’ disclaimer to the update,” a spokesperson said.

The spokesperson said the Seven Network advised Medibank it was adhering to “all standards”.

“Medibank and the Seven Network believe the updates have always been distinguishable as paid Medibank content,” the spokesperson said.

“Medibank takes approval by Commercials Advice (CAD) seriously and was advised by the Seven Network we were adhering to all standards.”

To add insult to injury, the actors are demonstrating poor practice in tooth cleaning – to those who know, clearly not a medical statement, but to the public may look like good dental practice. Shame on the PR people in Medibank.