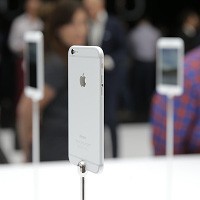 Before the iPhone 6 was even launched this morning, Australian e-commerce business Alphatise was already attracting worldwide headlines by scoring the first two spots in the queue for the new gadget.

At Apple’s flagship store in Sydney a team of six employees from Alphatise have secured the two positions in a guerilla marketing coup.

As the iPhone’s release is timed on the rising of the sun, Alphatise will receive the first and second iPhone 6’s to be sold globally.

Paul Pearson, chief executive of Alphatise, told SmartCompany the e-commerce startup has hijacked the launch in order to give the phones away to two of its customers via Alphatise’s Facebook page.

“We are securing position one and two and we are not giving it up for anything,” Pearson says.

He admits joining the queue is “a publicity stunt at the end of the day”.

“We are trying to be cutting edge and trying to be a little crazy, it’s a little extreme but that’s what our company is about anyway,” Pearson says.

Six of Alphatise’s 50 staff volunteered to be part of the team queuing after Pearson pitched the idea.

“They jumped at the opportunity,” he says. “People are very passionate about Alphatise.”

The six staff members are on rotating shifts in the queue with all meals supplied and “hazard pay”.

(L-R Salvatore Gerace and Christian Ibrahim will keep their places by working in shifts 24 hours a day.)

Apple provides 24 hour security for those queuing, so Pearson says “I don’t think there’s much hazard to be honest”.

Hijacking Australia’s Apple queue is a tried and true method of getting publicity, with MobilePhoneFinder scoring the top six spots in previous years.

Pearson says the business is “gearing up for global expansion”.

Alphatise’s smartphone and web-based app allows consumers to request a product they want, indicate how much they’re willing to pay for it, and then gives sellers the opportunity to match that deal.

The business has already raised $3 million and is planning another $12 million capital raise in mid-October.

“We have had expressions of interest from a lot of venture capital firms out of Silicon Valley and locally as well,” Pearson says.

Alphatise is targeting Malaysia, Hong Kong, the Philippines and Brazil for its launch.

“It is very strategic from our part. We see Alphatise as being long term definitely about the manufacturers globally,” Pearson says.

He is reluctant to reveal the business’ turnover at this early stage but says Alphatise processed 50,000 “wishes” in its first week which has “blown expectations”.