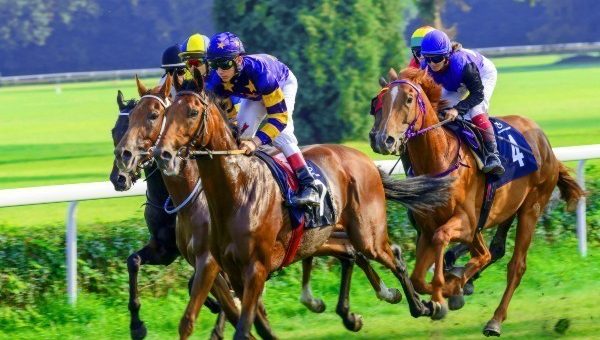 It might be the race that stops a nation but it’s also an excuse for marketers to try to stand out from the crowd and win some punters’ cash.

This afternoon Australians will gather to find out which horse will take out this year’s Melbourne Cup and the $6.2 million in prize money up for grabs.

While most Melburnians and some Victorians are enjoying a public holiday – and others around the country lobby for a nationwide celebration – many in the business community are also capitalising on the lucrative event, which generated an additional $195 million in tourism spending in Victoria in 2014.

But are the below examples clever publicity tactics or example of businesses taking things just a little too far?

Well-known for its ambush marketing, Messages on Hold managed to get its brand seen by millions attending and watching the 2008 Melbourne Cup, when it paid a group of men to stand in a pre-determined spot near the race’s finish lines with giant form fingers.

The moment was captured by the television cameras and played in slow motion to TV sets around the country.

“Year after year, that image has been replayed to preview the Melbourne Cup. It’s achieve unbelievable coverage that cost me just a thousand bucks.”

A stunt by Racing Victoria during the 2009 Spring Racing Carnival was less successful, with the racing body accused of offensive and unacceptable behaviour when it ran a dwarf race at the Cranbourne Cup.

According to the ABC, the dwarf race involved three dwarves dressed in jockey silks, who rode on the backs of three people on a 50-metre long course.

Victoria’s racing minister at the time labelled the race embarrassing.

Smart50 finalist Punters.com.au is known for its clever content marketing and one of its biggest success stories was its April Fools’ gag about the successful cloning of champion racer Black Caviar in 2014.

“It was a Facebook hit with a reach of 384,000 users and it was written up as one of the best April Fools’ Day gags in the media,” Punters.com.au founder Luc Pettett previously told SmartCompany.

“Since then, we’ve had a couple of posts that have reached 1.2 million people.”

Punters.com.au is also having some fun with today’s event, creating a Melbourne Cup form guide in emoji form.

Global bookmaker Paddy Power is no stranger to controversy for its racing themed stunts.

In 2010, the bookmaker erected a 50-foot high free-standing billboard made out of the letters of its name next to the venue of the Cheltenham Gold Cup.

For the same event in 2012, Paddy Power created its own jockey image on top of the well-known Uffington Horse image in Oxforshire.

And back in 2002, the betting giant was flooded with complaints about an ad in the UK that showed two elderly women crossing a road, next to betting odds.

While the company said the odds were for who would cross the road first, some members of the community claimed Paddy Power was wagering on who would be run over first.