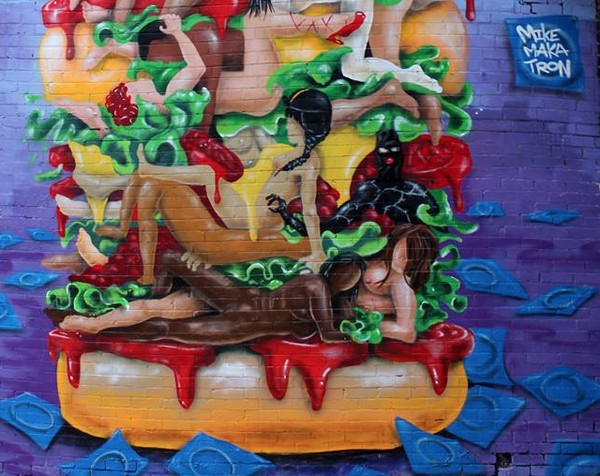 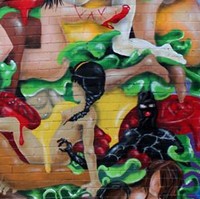 Above: Makatron’s mural has been considered too explicit by some (Mike Makatron)

A family business that has been operating for more than 40 years has made headlines this week after a local council told the business it would need to remove or modify a mural on the outside of its building.

Rathdowne Fabrics has been run by the Sunshine family in the Melbourne suburb of Brunswick since the early 1970s.

This week the small business has been in the limelight because of a mural on the outside of the building by prominent Melbourne street artist Makatron.

Known for his hamburger murals, Makatron completed the “kama-sutra burger” mural on Tuesday. The image features naked people having sex inside a burger.

But after discussing the mural with Sunshine, the council agreed the artwork would not need to be removed and instead Makatron and Sunshine could modify the image.

“When they came in yesterday I was happy to work with council to resolve it, I did not want it removed, I said I’d get Maka back in to make everyone happy,” Sunshine told Fairfax.

“When Maka started painting it I said it was looking a little full on, he said, just wait ‘til it’s finished, once you’ve got the tomatoes and cheese and lettuce in there the naughty parts will be covered up a bit.”

Kama Sutra Burger – finished this yesterday in Sunshine Lane , and local council received a complaint so want it removed asap , I’m making a few Tshirts of this -$30 – link is in my Instagram profile

“I’ve never had more mixed reactions to a piece.”

Sunshine has made his business building a location for street art and he told Fairfax he gives artists free range when it comes to creating their masterpieces.

Sunshine and Makatron said this particular piece is about how sex is used to sell everything, including food and “how the media treat men and women like meat”.

“But there are subliminal message in there as well, there are condoms at the bottom promoting safe sex. And there’s a real diversity of people in the mural, so it’s promoting multiculturalism as well,” Sunshine said.

“And let’s face it, this town has a fascination with burgers, it’s ridiculous.”

Communications and social media expert Catriona Pollard told SmartCompany this morning Rathdowne Fabrics now has an opportunity to use the public’s attention on the mural to its advantage.

“It’s light-hearted and humourous so it is safe enough that it will not going to negatively impact your brand,” Pollard says.

Pollard recommends brands in a similar situation consider what social media assets they already have and how they might use those assets.

“Think about what your tone is as well, what imagery you can use, what words you can use,” she says.

“You can almost newsjack it, use that technique as it is already getting airplay.”

In this particular case, Pollard says Rathdowne Fabrics has the potential to create a conversation about the value of community art, which also fits with the company’s core business of selling fabric.

SmartCompany contacted Rathdowne Fabrics but Sunshine was not available to comment.