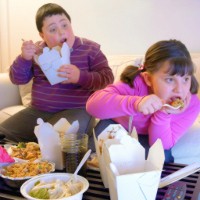 More than 20 major food brands have pledged to stop targeting children with ads that sell unhealthy products by 2018.

Major brands including Kellogg’s, Coca-Cola and Nestle last week made the pledge at the Consumer Goods Forum in Paris, in a bid to improve the industry’s image.

Brands such as Coke have previously tried to improve their credentials in this area, including screening ads about the impact of fat on our bodies in Australia last year.

By 2018, the brands committed to stop targeting children under 12 with advertisements for products that did not fulfil specific nutrition criteria or adhere to applicable international dietary guidelines.

But alcohol and drug policy expert, associate professor John Fitzgerald of the Faculty of Social and Political Science at Melbourne University, told SmartCompany the 2018 time frame was disappointingly slow.

“In terms of the time frame in which we expect industry to respond to community sentiment, this is very slow,” says Fitzgerald.

“It would be disappointing if we had to wait to 2018 to see this action, which is just common sense that most people would support,” he says.

James Mathews, spokesperson for the Australian Food and Grocery Council, told SmartCompany Australia was already ahead of the US and Europe in terms of its commitment to advertising unhealthy products to children, with an existing Responsible Children’s Marketing Initiative.

The initiative calls on companies to publicly commit to marketing communications to children under 12, only when it will further the goal of promoting healthy dietary choices and healthy lifestyles. Matthews says companies including McDonald’s have already signed on in Australia.

Fitzgerald agrees Australia is a bit further down the track than our US and European counterparts, with the creation of The Obesity Policy Coalition, which aims to change policy and regulation to help prevent obesity, particularly in children.

But he says a recent COAG report from June revealed both government and industry were simply not doing enough to prevent the onset of childhood obesity.

Fitzgerald is also sceptical of these big announcements, saying most consumers are fairly wise to a large company trying to gain credit for something that it hasn’t even done yet.

“The danger here is when a large multinational tries to create a story out of non-story, but people see the spin,” he says.

Mathews says that a ban on fast food ads, such as what exists in Quebec, has been shown to have no effect on curtailing childhood obesity rates.