Netflix’s House of Cards: The marketing genius that is #FU2016 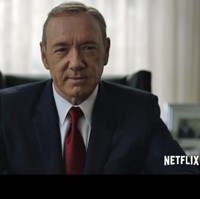 As the 2016 Presidential election campaign kicks into high gear in the United States, a wildcard contestant has emerged in over the past 24 hours.

With a slick campaign video that places people at the centre of his campaign and a website that rivals his real-world adversaries, the unexpected political candidate for the presidency of the United States of America is one Francis J Underwood.

Unlike your Donald or your Hilary –  Frank is a little more… niche.

While fans of the Netflix series House of Cards will be familiar with the story of Underwood’s rise to power, it’s what he does next that has our attention. Not because of a particularly juicy season three cliffhanger or the promise of more salacious political drama to come; but because his season four premiere marketing junket in the guise of an election campaign is as good as it gets.

Seriously, if Frank Underwood was a real person running for the presidency, Donald and Hilary would be in for one hell of a marketing showdown.

The United States presidential election is scheduled for 8 November, 2016. Democrat and Republican frontrunners Hilary Clinton and Donald Trump continue to dominate the news media with their campaigning activities and policies meaning Netflix’s primary audience is primed for hardcore political messaging. Instead of standing out as a fictional premise, #FU2016 fits right in with a clever twist on an old television series marketing template. Some will see it as pure entertainment, others will marvel at the political ingenuity behind the seamless marketing campaign. Either way, it fits both the character and series perfectly.

Frank Underwood (portrayed by actor Kevin Spacey) is a sublime blend of Hollywood royalty meets powerhouse politician. Underwood’s brand is entirely believable: from visionary imagery to a colour palette and soundtrack legitimised with a distinctly American patriotic flavour, brand Underwood is as nuanced as you’d expect from a genuine political candidate. The result? Audiences (new and old) that feel a sense of familiarity with the campaign as it cascades through it’s pre-election cycle.

Plug the URL www.fu2016.com into Facebook and you’re an instant supporter:

Head over to @FUnderwoodHOC on Twitter to get your “Francis J Underwood for president” badge. There is even a downloadable media kit so you can deck out all your social media channels in #FU2016 livery.

This is political social media integration so well delivered that it should be used as a case study for political campaigners around the world. Hot links with onsite integrated content; call to action buttons and email subscription prompts – the only thing missing is the real life ‘donate-here’ imperative.

If you are a House of Cards fan you’ll know that Frank Underwood has no qualms about putting a permanent end to those who pose a risk to his conniving ambitions, making the ‘FU’ hashtag campaign and website URL a beautifully crafted double entendre. Sure it’s Frank Underwood’s initials, but it’s also a clever stab at both the characters detractors and his aggressive attitude towards retaining power.

“They say…” those who can tell good relatable stories, capture people’s hearts and minds.

Underwood’s blog reel reads like a biography in progress, taking his audience on his journey with him in lockstep. Not missing a beat, the stories he tells are steeped in political campaigning strategy focusing on jobs, families, national security, safety and economic prosperity.

This article was first published on Nicole Matejic’s website.