How to (and not to) write an effective email

Do you write annoying emails? Do you receive them? Poorly written emails irritate both the recipient, who resents the interruption, and the sender, who gets frustrated by a lack of response.

So how to get them right? I’m about to take you through five real-life examples that illustrate traps to avoid and how to better engage your intended reader.

I’ve redacted the details of the senders because in no way is this intended to criticise them personally. These were people who crafted messages they thought were good. I mean, no-one tries to produce content that is pointless, do they? This suggests there is a real problem out there though. We’re wasting time and energy on writing in the wrong way, so let’s look at about how to better communicate so stuff gets done. 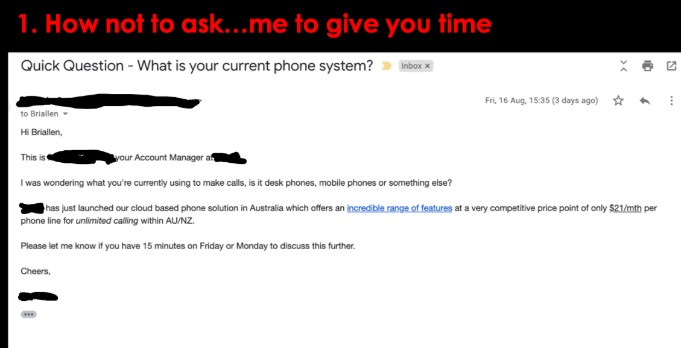 This account manager started with a “quick question” about something that was none of their business before asking for 15 minutes of my time. Errr, no. I have better things to do than be sold to. Their positioning was all wrong.

What did they want? For me to agree to a 15 minute phone conversation.

What did they need to overcome? Apathy. Why should I commit 15 minutes of my time to be sold to? Also, my anxiety about being forced into a product I didn’t want.

Were they successful? No. I was irritated by them thinking it was a “quick question”, asking a question that was none of their business, and wanting 15 minutes to talk

Did they do anything well? They addressed me by name and provided their logo and signature line so I knew it was legitimate. 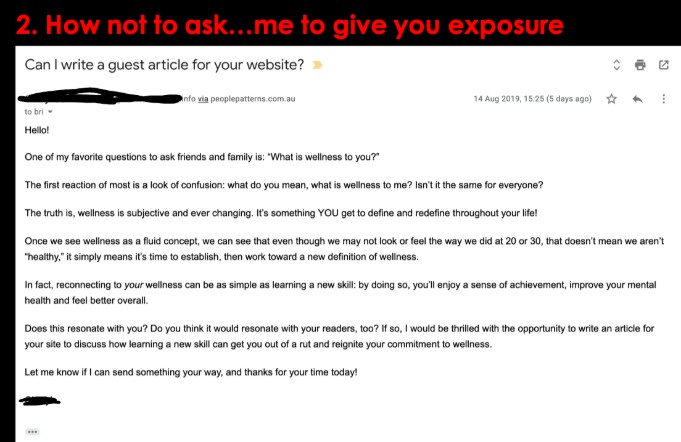 This stranger wants to bang on about wellness on my website even though it is more about business effectiveness. No thanks. If you want to be part of something someone else has built, tell them what you like about it, how you fit and why it’s a good thing for them.

What did they want? Me to agree to them writing for my site.

What did they need to overcome? Apathy. Prove why this is of value to me so I even bother to reply.

Were they successful? No. They failed to make it easy for me to see value. There was no ‘what’s in it for me’.

Did they do anything well? The subject line was clear so I knew exactly what it was about, but I only opened because I was curious about how they were asking rather than having anyone write for my site. 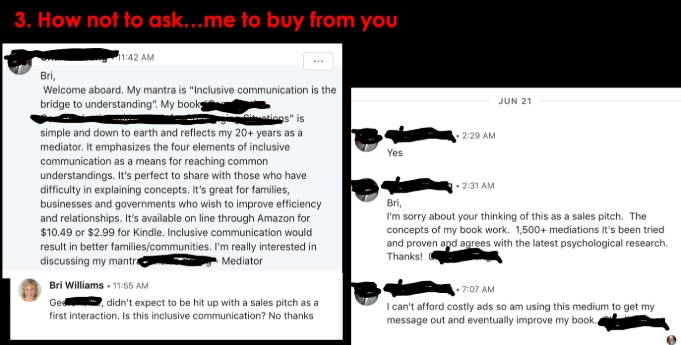 This brand-new LinkedIn contact thought they’d introduce themselves by shoving their book down my throat. No sale.

What did they want? Me to buy their book.

What did they need to overcome? Apathy. This was the first LinkedIn exchange and breached social mores by jumping into a pitch.

Were they successful? No. They came on way too strong.

Did they do anything well? Not really. 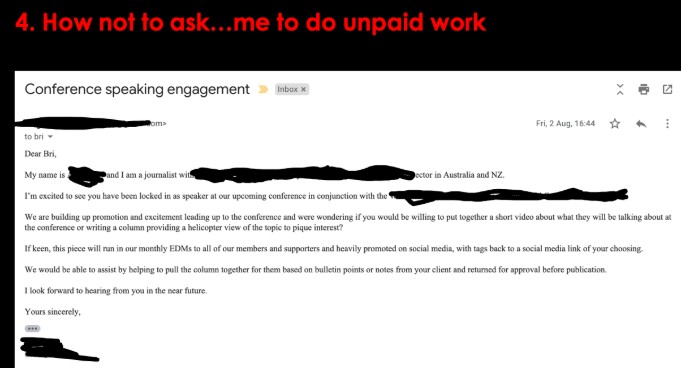 This journalist wants me to write an article for them. When effort is greater than reward, people won’t bother to do what you ask.

What did they want? produce content for them for free.

What did they need to overcome? Apathy. Why is the reward for doing this greater than the effort involved?

Were they successful? No. Weak WIIFM for a busy professional.

Did they do anything well?  The subject line made me open the email. Could have been better if they said ‘about your upcoming talk at X conference’.

This is one of my favourite emails of all time. A colleague was asking for me to contribute pro bono to a project, which I gladly did because they asked in such a great way.

What did they want? Me to do work pro bono.

What did they need to overcome? Apathy. Why should I bother?

Were they successful? Yes. Highly engaging and provided enough WIIFM.

Did they do anything well?

Key takeaways from these examples

Asking someone to do something is a fundamental business skill. You spend hours every day doing it. Yet your inbox and the examples we’ve worked through suggest too many are getting it wrong.

That means you have an opportunity to stand out for the right reasons. Here are some pointers on building your emails.

NOW READ: Thanks for your email: Why you need to shake-up your out-of-office message immediately