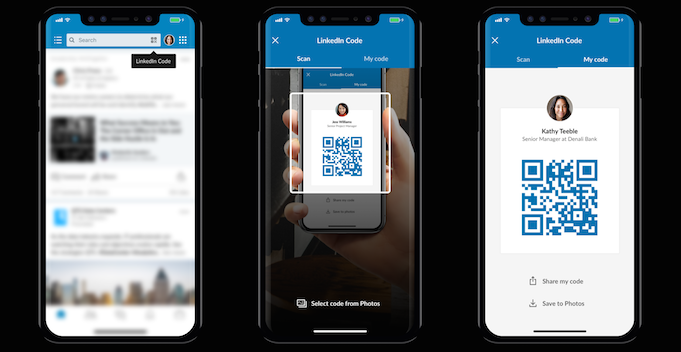 Do you still carry around business cards, ready to hand at to any willing takers at the next fabulous networking event you find yourself at?

There’s little doubt business cards are no longer as prevalent as they once were — most people’s details are but a Google search away — but chances are someone, somewhere will still ask you, ‘do you have a card?’

Professional networking site LinkedIn is hoping to change that conversation by quietly introducing a new feature to make it easier to immediately connect online with a potential client or customer, without having to look them up the day after an event (or even remember how to spell their name).

At the end of June, the Microsoft-owned company released the LinkedIn QR Code, an individualised code that can be scanned from within the iOS or Android LinkedIn app to allow two people to connect on the site instantly.

The code can also be saved as an image to your smartphone and then included in offline materials too. Think conference lanyards, email signatures or even resumes.

LinkedIn users can use the feature by opening the app and then tapping the QR code icon in the search box, which is located on the Home tab.

From here, they can scan someone’s QR code, which will take them to that person’s LinkedIn profile, or click on ‘My code’ to find their own code to share with others.

Writing for Inc, entrepreneur and commerce expert Tom Popomaronis describes the new feature as potentially being “the smartest change” the networking site has made in some time.

Popomaronis, director of product innovation and business development at the Hawkins Group, says there will always likely be a use for physical business cards, and LinkedIn isn’t the first to attempt to surpass the traditional way of connecting at networking events. But it’s likely to be the most successful.

“LinkedIn has arguably done it best in terms of user-friendliness, especially since many of the people you’d be connecting with already have the LinkedIn mobile app (so it has already achieved mass adoption),” he says.