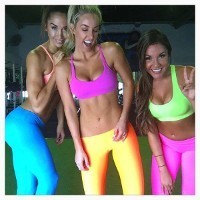 A former model turned fitness guru is suing the husband of another model and well-known fitness personality, alleging he was channelling money from one woman’s businesses into the other.

Body-builder Emily Anderson has lodged a statement of claim in the Southport District Court in Queensland against Steven Evans, the husband of online fitness celebrity Ashy Bines, according to the Courier Mail.

Anderson alleges Evans, who launched his wife’s successful online presence, Ashy Bines Bikini Body Challenge, contacted her via Facebook in 2013 about a potential business partnership, promising he could “make something” of her like he did for Bines.

Evans allegedly told Anderson he had a professional background in internet marketing by social media and the development of weight-loss programs.

Anderson launched her business, Emily Skye 30 Day 2 Shred, which offered workout routines and meal plans to women through an online service, with Evans as the sole director in February 2013.

Anderson’s company, which has since been relaunched as Emily Skye 28 Day Shred, is now seeking $501,619 in damages over claims Evans funnelled her money into Bines’ businesses instead and also failed to promote her business effectively.

Evans resigned from Anderson’s company in October last year. His LinkedIn account shows he is still the director of Bines’ company, which offers face-to-face group fitness training across 50 locations in Australia.

The Courier Mail reports the damages consist of $168,729 for money allegedly paid without authority or without obtaining a tax invoice, and $332,890 in relation to Facebook advertising, which Anderson claims was ineffective in generating revenue.

Bines has a hugely successful Facebook presence, including more than 623,000 followers. Her page is often featured as sponsored content on the social network. In comparison, Anderson’s Facebook page has around 278,000 followers.

“For an online businesses that relies on driving traffic to web clicks and purchase, Facebook advertising is one of the most effective strategies,” says Pollard.

She says $330,000 is not an unreasonable amount to spend on a Facebook campaign, depending on the time period that it was spent over.

“I would suggest that a Facebook campaign would have resulted in dramatic sales. If they didn’t get them, they would have noticed.”

SmartCompany contacted both Ashy Bines Bikini Body Challenge and Emily Skye 28 Day Shred but did not receive a response prior to publication.