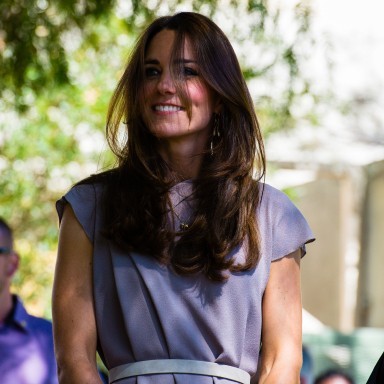 Cash registers around the world are about to ring again as businesses get set to cash in on the announcement of the impending arrival of royal baby number two.

The palace announced the pregnancy of the Duchess of Cambridge yesterday sparking a media frenzy.

Businesses are keen to get the royal stamp of approval given the last royal pregnancy and arrival of Prince George resulted in a sales boom for some retailers.

Women’s fashion and maternity wear, baby clothing, commemorative plates, coins and memorabilia are all areas set to benefit from a second baby after Prince George delivered an estimated $400 million boost to the British economy alone.

Raegan Moya-Jones, the Australian founder of baby clothing company Aden + Anais, received the ultimate sales endorsement when Prince George was wrapped in her product for his introduction to the world.

“You couldn’t even put a value on that for what that meant for the company in terms of brand awareness on a global sale,” Moya-Jones told SmartCompany earlier this year.

Felicity Wilkins, co-owner of Melbourne-based business Cou Cou Baby Boutique says she expects to get a definite boost in sales from a second royal baby.

Cou Cou Baby Boutique experienced a spike in sales of its traditional rompers and overalls following Prince George’s visit to Australia and for his first birthday.

“It increased business in those times by about 50%,” Wilkins says.

“We did a lot of marketing and got a lot of media so that really helped.”

But the one thing which could make royal baby number two an even bigger bonanza for retailers is if the baby is a girl.

Michelle Gamble, owner of Marketing Angels, told SmartCompany the gender of the royal baby will make a big difference.

A baby girl would be the first royal female since the 1920s when Queen Elizabeth was born.

“I think it will be big news if it is a pink one that’s for sure,” Gamble says.

“It’s a great opportunity for anyone supplying to pregnant mothers and new mothers to leverage what’s in the media to get their brand out there.”

“We’ve got all the beautiful smocked dresses just for little girls that a lot of parents are happy to spend the money on for special occasions,” she says.

However, it’s not just brands with obvious synergies which are seeking to cash in on the second royal baby.

Gamble warns there will be some “news jacking” from public relations companies.

She points to Nissan’s advertisement for the X-Trail which it says could fit the Queen as well as triplets and alcoholic drink WKD’s ad for a “bun in the Aga”.