We are all sheep: What Uniqlo and H&M tell us about Australian retail 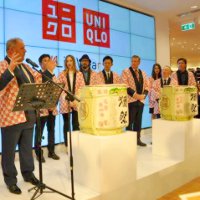 What do H&M, Uniqlo, Krispy Kreme, New Year’s Eve, and the AFL Grand Final have in common?

Scarcity. Well, at least for a short time.

And a little bit of hype, plus some tribal instincts and social modelling thrown in for good measure.

If you’re one of those people who lined up in the rain last week so that you could get some Scandinavian bargains at H&M in Melbourne, you’ll have a sense of what I am getting at (and you may also be open to the idea that maybe the future of traditional shopfront retail is not all doom and gloom.

If you one of those hundreds of people who queued up for three days at Fountain Gate in Narre Warren to be there when Krispy Kreme’s first Melbourne store opened at 6:30 am on June 22, 2006, you will also know what I mean.

If you are one of those thousands of people who line the harbour in Sydney, or squeeze into a tiny spot down at The Rocks, just so you can get a glimpse of the New Years eve fireworks through a gap between two huge buildings, then you’re already on this journey.

And if you lined up for AFL tickets…well, you get the picture. But don’t be too hard on yourself. It’s an evolutionary thing, and it is actually quite useful.

As human beings, we assume that if lots of people want something, then we need to be part of it – it is the scarcity effect at work. Humans are social animals, and although we would like to think that we are all independent thinkers, the reality is it would simply be impossible to think about everything we do in isolation, and on its merits. So, we look to others to help us decide.

If everyone in our “in-group” is lining up to buy from H&M, Zara, Uniqlo, or even Krispy Kreme, then we assume that the group knows best, so we should do the same.

Yes, we are all sheep.

But you shouldn’t be worried about that. We all do it, depending on the attitude object. For example, those people criticising the “crazy” kids lining up to buy something from H&M might be the same people who travel the world, spending thousands of dollars to see an opera that finishes where it started.

But beyond human behaviour, there is also something more specific to retail at play that is less clear.