What does the future hold for our traditional department stores? 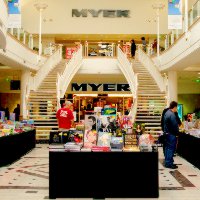 Years of buy-outs, takeovers, mergers and rebranding have whittled a once plentiful landscape of department store competitors down to two major players, Myer and David Jones.

Now, despite David Jones confirming it refused a potential A$3 billion merger proposal approach from its arch-competitor in October 2013, we must face the distinct possibility of there only being room for one, full line, up-market department store in Australia.

I have written before how the big two department stores have been fighting a losing battle against new competitors, a changing consumer – and themselves. Department stores have failed to respond quickly enough to changes in shopper behaviour, emerging category killers and the growth of online shopping.

Myer has said the proposal, which was rejected by David Jones, would have helped increase sales, reduce costs and limit duplication, although it would certainly have come with significant competition issues. David Jones’ share price has risen after the news of its rejection was made public. Media reports have also revived controversial share dealing by two David Jones non-executive directors.

Where visiting a department store used to be an event involving tea and scones at the Myer Emporium, we now demand sushi, pad-thai or Vietnamese spring rolls from international food courts. Instead of hovering assistants, we want to scan and pack our own purchases, or shop from our lounge rooms. Suburban sprawl and growth of shopping centres – where we can get our car washed, watch a movie, do our groceries and buy a handbag – has stopped us coming into the city. We want entertainment, one-stop shopping and the biggest range of choice. Something department stores cannot offer today.

Where once we would buy dress yarn, furniture, white goods, school shoes, electronics, even automotive accessories (remember Myer had an auto department) at the big department stores, now we head to IKEA and Super A-Mart for furniture; Anaconda and Rebel for outdoor and sport products; Bunnings and Masters for home improvement and hardware, while JB Hi-Fi and Harvey Norman dominate the consumer electronics market. It is a market lost.