Why the Woolworths brand is used by more than one company 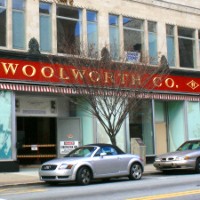 The bid for David Jones from South African retailer Woolworths brings to light one curious dimension of international business – the proliferation of firms with very similar brand names but distinct identities.

That so many versions of Woolworths can be found around the world often causes confusion, so here’s some business history to hopefully clear up the etymology.

US “five and dime” pioneer F.W. Woolworth Company is where it all started. It commenced operations in 1878-9 and quickly grew to be one of the largest retail chains in the US. The company’s headquarters in New York was, for a time, the tallest building in the world. The firm ran what we would now call low-cost, High Street, variety stores. F.W. Woolworth did not pursue a supermarket business, but did venture into department stores and speciality stores – most successfully Foot Locker.

With the decline of smaller scale variety stores, especially in the face of Target, Kmart and eventually Walmart, the US Woolworth stores eventually all closed and the parent company was renamed Venator in 1997. The company now trades under its most successful brand, Foot Locker, has a retail presence in 23 countries, and is the world’s 164th largest retailer (according to Deloitte).

The US firm internationalised into Canada, Mexico, Ireland and more significantly into the UK (in 1909) and Germany (in 1927). The UK stores flourished and became a staple of the High Street. The UK firm spun off from its US parent in the early 1980s, and operated successfully until late last decade.

In 2008 the UK entity entered receivership, as the firm had failed to manage the competitive onslaught from supermarket chains such as Tesco, Marks & Spencer and Asda and the decline in CD purchases (one of its biggest market segments). The firm’s 800 plus stores were closed and the brand was sold to an online retailer.

The German business was similarly prolific and by the time it spun off from the US parent in 1998 it had over 300 variety stores across Germany and Austria. It also battled insolvency in 2009, and was purchased by local giant Tengelmann (the world’s 88th largest retailer) which has revitalised the brand.

Most of the Canadian stores were sold off to Walmart in the mid-1990s. The rest closed. The Mexican business (in operation since 1956) slowly shifted into Mexican hands from the early 1980s (due to restrictive foreign ownership rules) and still operates under the Woolworth name.