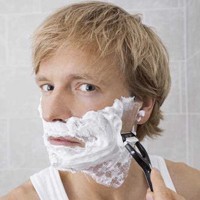 The Advertising Standards Board has dismissed a complaint against a “strange” and “ridiculous” television ad by the Shaver Shop.

The advertisement shows a couple kissing in a bedroom before the woman excuses herself to take a phone call.

While the woman is gone, the man in the video clip looks around the room and spots a shrub on the bedside table – before running into the bathroom looking for personal grooming tools.

The man apparently uses shears and considers employing a blowtorch on his genital region before finding a Remington Man Trim shaving device.

A voiceover then announces the Remington Man Trim is the “right tool for the job”.

One person who complained to the board claimed the ad is inappropriate and would encourage small children to “take to themselves with shears or torches”.

“In the advertisement, it appears like he is endangering his penis, not his pubic hair,” the complainant said.

“I also had issue with this ad as it indicated there was going to be a sexual encounter. Inappropriate, surely they can think of a better way to sell things besides always resorting to sexual connotations.”

In response to the complaint, Shaver Shop said the television commercial was given a PG rating and adhered to the rules governing TV advertising.

While a minority of the members of the board thought the trimming of pubic hair raised the issue of sex in a matter that was not appropriate for the relevant audience, the board decided the ad was consistent with PG-style comedy.

In particular, the board ruled the ad was not inappropriate because the man’s groin region was not visible.

As for the claims of dangerous behaviour, the board ruled the comedic tone of the advertisement meant most reasonable members of the community would be aware using garden shears or a blow torch near their groin would be dangerous.

“The majority of the board considered that the advertisement did not encourage or condone unsafe behaviour and overall did not depict material contrary to prevailing community standards on health and safety,” the advertising standards board ruled.

Dr Lauren Rosewarne, an expert in pop culture and sexuality from Melbourne University, told SmartCompany she thinks the ad does not encourage dangerous behaviour.

“While dangerous behaviour is often a concern of the Advertising Standards Board, the humour of this ad lies in the fact that the man realises the error of his ways by working his way through numerous inappropriate tools before finding the right tool for the job,” Rosewarne says.

“His treatment of the dangerous tools is, in no way, an encouragement for the audience to mimic the behaviour. That the ad only received one complaint highlights that most Australians have a sense of humour, or alternatively don’t care enough to complain.”

Rosewarne also says the ad stands out because of the way it puts the spotlight on men’s self-esteem.

“The ad is surprising for its focus on men feeling the pressures of body image and notably the grooming of their pubic hair which is an unfamiliar presentation and pressure we usually associate with women,” Rosewarne says.

SmartCompany contacted Shaver Shop but did not receive a response prior to publication.