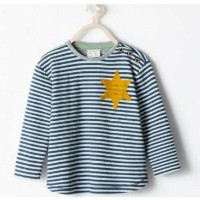 Global fashion chain Zara has been forced to pull two of its products in two weeks, after it faced online outrage on Wednesday over a children’s shirt likened to the concentration camp uniform worn by Jewish prisoners.

Two weeks earlier, Zara came under fire for a T-shirt bearing the slogan: “White is the new black”.

It’s not the first time a retailer has been forced to recall a product after social media backlash, as customers continue to air their grievances online.

The striped shirt, which was available in countries including Israel, France and Denmark, featured a yellow six-pointed star, which led commenters to say the garment resembled the striped uniforms of World War Two Jewish prisoners of war.

The star had the word “sheriff” written on it, but this was not clear to customers from the website images for the product.

Zara International quickly responded, pulling the shirts and apologising, and said the star was inspired by sheriff’s stars from the Classic Western films.

“We are sorry to hear that you felt displeased with one of our items,” a spokesperson for the Spanish retailer said in a statement.

“[It is] nothing further from our intention and we can communicate [to] you that the T-shirt is no longer on sale in our stores.”

“We would not want any of our products or designs to be perceived as disrespectful or offensive… In addition, respect and dignity are amongst the principles that define and guide our corporate value; we vehemently reject any form of discrimination.”

Zara pulled its “White is the new black” shirts earlier this month after an online backlash that deemed the shirt “racist” and “offensive”.

The T-shirt, which was a reference to TV series Orange is the New Black (a play on the common fashion phrase) and the prevalence of the trend of white clothing this season, was thought to have been discriminatory.

A spokesperson for Zara Australia confirmed to SmartCompany both T-shirts did not hit the shelves in Australia and will not be sold here.

In 2007, Zara also withdrew a handbag from shelves after one customer pointed out the design featured swastikas.

Digital marketing expert Michelle Gamble, from Marketing Angels, told SmartCompany the slip-up was clearly an oversight from the design team.

“They are following trends, but obviously it just slipped through the cracks,” says Gamble.

Gamble says the brand was smart to respond by pulling the shirts and apologising quickly.

“They are a global brand with a hugely broad appeal. They need to be really careful when it comes to potentially upsetting their customers,” she says.

Gamble says its likely Zara will now review its design processes, to check for any potential to offend.

“Zara won’t be damaged long term though. It was an oversight and it was quickly corrected and they have such huge global appeal. They will put things into place in the approval process to make sure it doesn’t happen again,” she says.