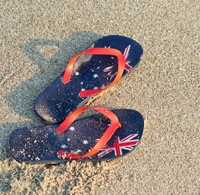 A cafe on the New South Wales south coast has been slammed online after erecting a sign saying it would be open on “National Dickhead Day”, otherwise known as Australia Day.

The sign was put out the front of the Mister Jones coffee shop in Bermagui the day before Australia Day, informing customers the cafe would continue to serve coffee the next day and “every day” after that.

However, a photo of the sign quickly found its way online where it copped significant backlash.

Mister Jones Coffee Shop in Bermagui Your Attitude is as Bad as Your Coffee .

Posted by Meanwhile in Australia on Monday, 25 January 2016

Read more: Why do so many brands run into marketing trouble on Australia Day?

It has been shared on Facebook pages such as “Aussie Infidels” and “The Great Aussie Patriot”, with the cafe owners labelled “hipster dickheads” and “left wing traitors”.

The business has since been flooded with negative Facebook reviews, with numerous one-star reviews in the past 24 hours.

“You have become one of the most hated businesses in Australia,” one person wrote.

“How dare you disrespect Australia. If u don’t love this country u and ur hipster can get on a boat and go to Iran.”

Another reviewer said it was unwise for the business to “taint everyone with the same brush”.

“People have the right to celebrate in any which way they like,” the person wrote in their one-star review.

“They also don’t buy or support businesses that like to insult the general public. Stupid move on your behalf… hope people came in and told you how much of a ‘dickhead’ you’ve been on this day. You’re a shame.”

However, the small business has also received some support, with a few people recently leaving five-star reviews.

“Next time I’m in town, I’m definitely stopping in for some awesome coffee and good vibes,” one person wrote.

“Don’t listen to all the dickheads with their misplaced ‘pride’ and bogan flag capes,” wrote another.

“You guys are hilarious for putting up that sign! Those who see Australia Day for the shameful celebration it is appreciate your humour.”

It is not the first time Mister Jones has erected a sign for Australia Day.

In 2015, the cafe put up a sign saying “strictly no patriotism beyond this point”, according to Bega District News.

Social media and crisis communications expert Nicole Matejic told SmartCompany she believes far-right groups have focused on the cafe’s sign to suit their own agendas.

“This business has posted similar signs in the past, and while everyone is free to express their opinions, business owners need to realise that it’s not always appropriate to share their views,” Matejic says.