Burger King’s whopping IWD PR fail: What can you learn?

‘Women belong in the kitchen.’

Burger King sparked outrage this week when it tweeted that one-liner on International Women’s Day (IWD). 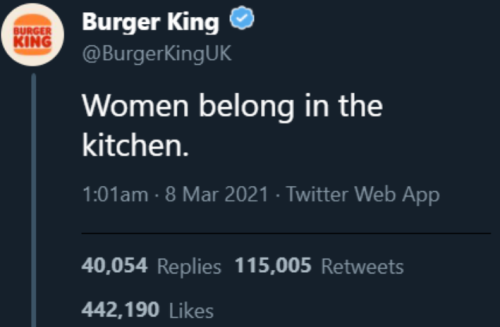 The fast-food chain went on to say the message was “designed to promote a scholarship for female chefs in the male-dominated hospitality industry”.

But the headline sent social media into a predictable frenzy, with many arguing the noble sentiment of the campaign was lost in poorly executed, and sexist, shock-bait.

Three days later Burger King finally deleted the tweet and apologised for the offence it caused.

It seems some businesses still believe in the ‘any publicity is good publicity’ model but there’s no doubt that Burger King suffered serious damage to its brand with the stunt. I’m not sure women will be filled with good will for the brand, let alone want to work in Burger King kitchens, after the campaign.

A well-executed activation on social media can catapult your brand to dizzying heights, often for a very modest cost. But it can be a gamble, and we’ve seen the fall-out for a business when it goes sideways.

So, what are the takeaways to ensure your PR stunt or activation creates a memorable message for the right reasons, and not becoming a whopping fail?

Prioritise the message over shock value

When a company gets an activation wrong, it’s easy for people to overlook the intent of the message and focus entirely on the delivery. For Burger King, the headline was so controversial that public outrage dominated the conversation and the key message about their recruitment program was lost.

Businesses that do activations well tap into trends. They understand the sentiment behind them and piggyback their message in an authentic way.

A good recent example was news site Mamamia, which transformed its headlines on IWD by ‘flipping the script’ on gender stereotypes with satirical articles to show that these kinds of headlines are still reserved for women.

Headlines like “Andy Lee goes bra-free on a carefree stroll around Melbourne” and “Is something wrong? Fans say Waleed Aly should smile more” led us to have that ‘aha’ moment and question our role in reading this kind of material.

It’s clever, with a touch of humour but it doesn’t take away the overall message.

Tailor your campaign to each platform

When the Burger King campaign was executed in a print ad in The New York Times, readers could quickly see that the line was being used ironically.

But on Twitter, the phrase was posted without any context. Burger King used the reply function to add context to the controversial one-liner, but they failed to understand that the platform makes it easy to share a tweet, but not a whole thread.  This meant their statement was front-and-centre for the social media world to see, without any context to suggest there might be more to their IWD activity.

Choose your platforms carefully and tailor your message to each platform. The format gives context to how people interact with your message and should be top of mind when you’re crafting the variations of your campaign before you launch.

Test your message with your target market

Savvy social media users asked who approved the message, and pointed out that the entire board of directors at Burger King is male.

It pays to be collaborative and test your campaign with your target audience to ensure your message is received in the way it is intended. Also, having a diverse leadership at your organisation helps. Woman don’t ‘belong’ in the kitchen but they do belong in the boardroom.

The payoff of a publicity stunt should be positive media about the message, whether it’s measurable media coverage or increased brand status. While Burger King might see an increase in their media hits, the backlash has people talking for all the wrong reasons.

PR activations can be one of the hardest tools to master. But the secret sauce includes a few good ingredients and a hint of clever thinking.

I mean, what was wrong with re-branding to Burger Queen for the day?

Corporate culture clash: Inside the mess at MinterEllison

This is about more than an old-school law firm’s gender politics. It's part of a bigger problem rippling through workplaces all over Australia.

As a leader, you can’t assume those working for you know what you’re thinking, or the direction you want your business to go in. How can you get your business back to its original culture after a lack of clear brand guidelines leads to unwanted change as it grows?