#election2016: Three critical lessons for business from the enmeshment of social media and politics

This year’s election in the US had a hashtag (#Election2016) and an emoji – both signs that the language and influence of social media has well and truly made its way into daily life. 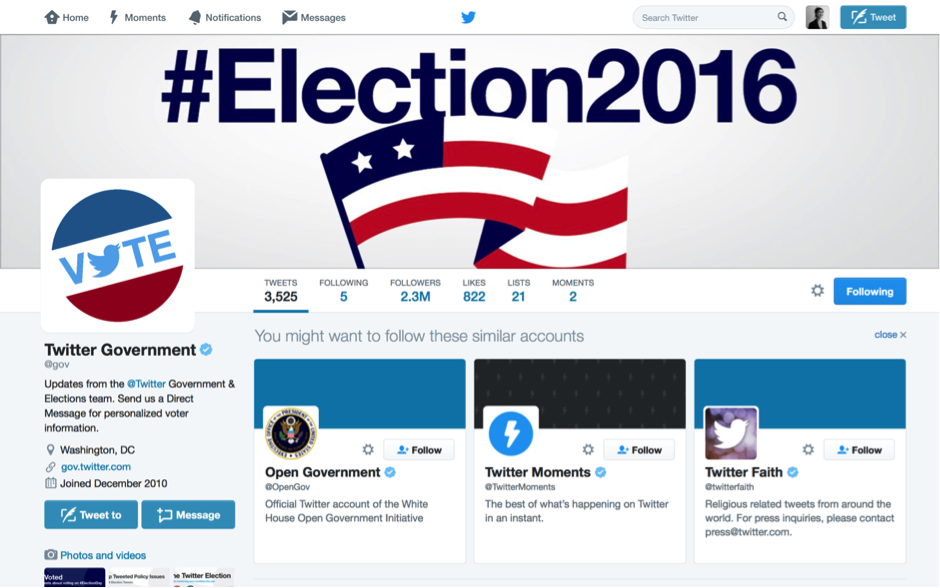 Media, voters, supporters, detractors, and spectators around the world connected with a click on Twitter, Facebook, Google, YouTube and Snapchat and accessed live debates, poll locations, and sample ballots. Foursquare even helped hungry voters find their nearest ‘democracy sausage’, which trended of course with its own hashtag.

Australia’s tastiest voting tradition has reached the U.S. on #ElectionDay thanks to @mjrowland68! #democracysausage https://t.co/Z1Wgk2Tt2e

The power of social media was felt at every step of the election journey, it helped prepare voters and predict trends; computer glitches necessitated changes to polling hours, crystallising the integration of social technologies with life.

There are key lessons for business –

Behaviour is complex, politics more so, and the 2016 US election was unlike any other, with Pew Research showing widespread polarisation and partisan animosity and voters worn out by political information.

While that makes it hard to unpack the influence of social media on voting preferences, related behaviours like increased registration were affected, although at this stage there are no firm figures on how well that translated into actual votes.

Facebook for example produced a Get Ready for Election Day page with a vote planner and three-step call to action:

It included practical information to help voters navigate the system, including the location of polling booths and sample ballot papers that could be filled out in advance. 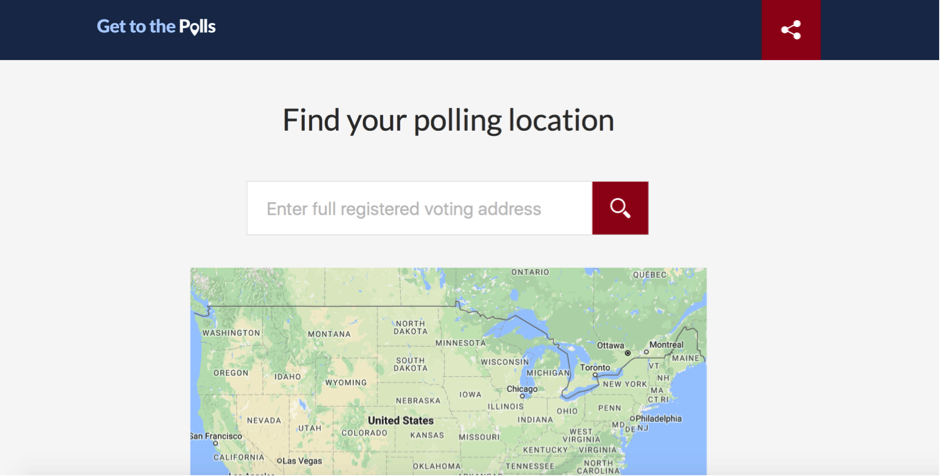 Facebook also showed a reminder in news feeds to encourage US citizens to vote on the day. According to past research millions of additional people vote because they’re encouraged by a Facebook friend to do so.

This is not the first time that Facebook, embedded in the lives of 1.79 billion people globally and 170 million Americans, has used its powerful algorithms to encourage civic engagement.

For example, in the three months prior to the previous election, Facebook increased the number of hard news stories in feeds of 1.9 million users, measurably increasing voter turnout. In a research paper, A 61-Million-Person Experiment in Social Influence and Political Mobilization, the platform claimed that “more of the 0.6 percent growth in turnout between 2006 and 2010 might have been caused by a single message on Facebook.”

I’m not precluding an influence on preferences; Sifry has suggested increased voter turnout may disproportionately advantage Democrats because there are more Democratic than Republican Facebook users but this is not widely accepted.

The initiative included a partnership with Rock the Vote and new ways to register to vote – a process that is not always easy in the US.

Voters who sent a direct message (DM) to @Gov with a five-digit zip code were sent a registration deadline and a personalised link to get registered. 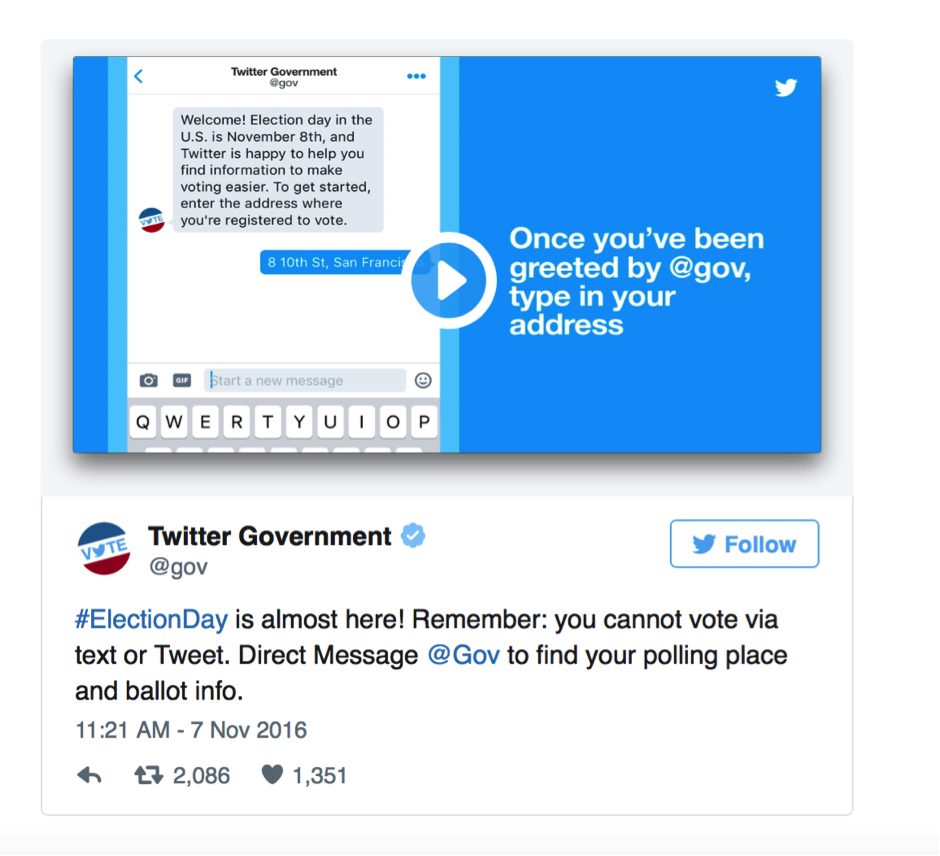 YouTube and Snapchat both focussed on galvanising young people who traditionally have a lower voter turnout (46 percent of eligible millennials in 2012 according to Pew Research).

There was significant online interest in the election. Over 110 million hours of candidate and issues-related content was watched, which YouTube attempted to converted into offline interest with a #voter (in real life) campaign.

To get young people to the polls Snapchat partnered with TurboVote, 10-second videos created by celebrities encouraged voting and Snapchat users could swipe up on the app and be directed to register.turbovote.org to sign up.

According to Global News ‘15 per cent of Americans who cast a ballot on Tuesday said it was their first time voting in a presidential election, according to an early reading from the Reuters/Ipsos national Election Day poll, up from 9 per cent of voters who said so in 2012.’

2. Social data does not predict political outcomes but may predict participation

While modern polling was once again shown to be an inaccurate barometer of political outcomes (think Brexit and the Australian Federal Election), trend data accurately predicted some behaviour, including higher voter registration.

Before the election Google’s knowledge graph (which shows trend data in real time) gave some startling insights on the power of search. For example, there was a 233% increase in traffic for the term “how to vote”, compared to the previous election. 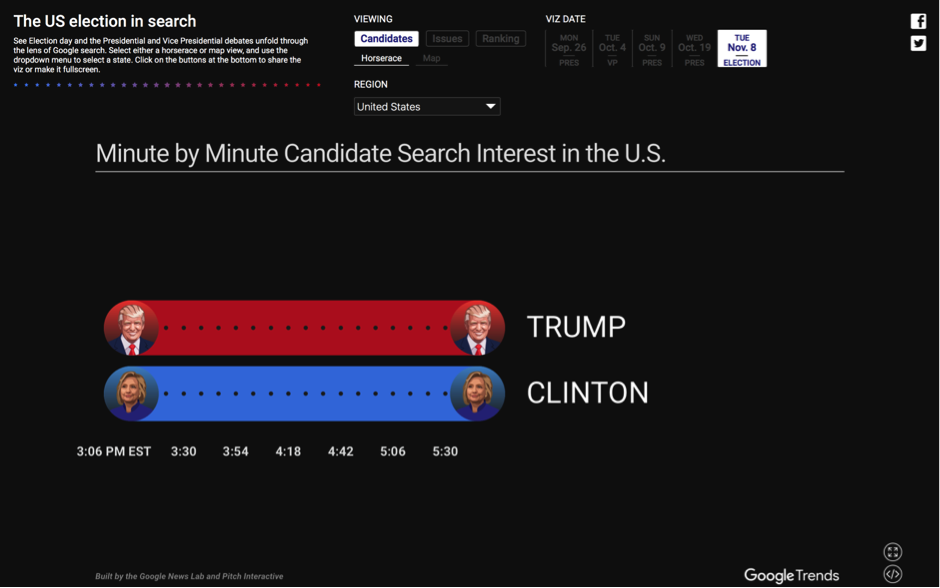 Not surprisingly, #election2016 and its variations consistently trended on Twitter. Prior to the election there was high interest in live streamed debates and active support of voter registration.

Calls for civic participation may have led to higher registration and activated some disaffected voters, although we will need to wait for final turnout numbers.

Huffington Post blogger Jay Shetty @JayShettyIW cleverly hashcrashed #elections2016 to point punters to a live meditation on Facebook. The peaks and troughs of any population data (like coffee drinking by the hour) can be used to make targeted business offers.

Social media is a powerful news channel with real time, direct access an audience of billions.

According to Nielsen, over 84 million people tuned in to see Clinton and Trump debate before #election day and social media channels were central to content creation and distribution.

You Tube live streamed election day coverage from NBC, PBS, MTV, Bloomberg, Telemundo and The Young Turks, in addition to its live streaming partnership with Complex. 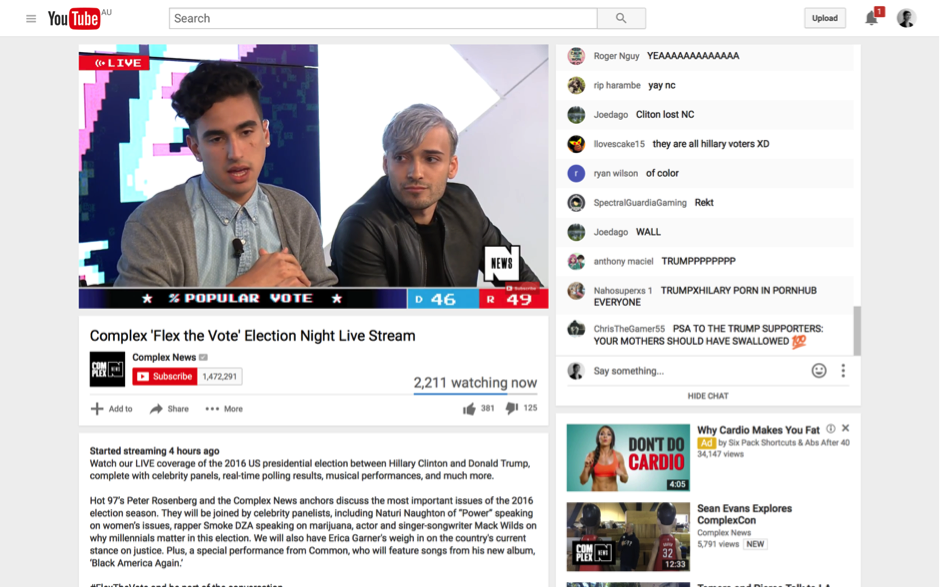 Throughout the election, candidates took to Facebook Live to hold their own unplanned, real-time news conference on hot topics.

Facebook founder Mark Zuckerberg has argued the social giant is not a media company because it does not create content. However, in this landscape distribution is as important as content creation and the newsfeed algorithm helps define what news is by determining what users see.

Facebook’s news feed is so powerful that Zuckerberg was called to The Hill to discuss whether Facebook curators were editing out conservative content. Politicians know that 54% of 18-24 year olds get pretty much all their news online and that across age groups, content is shared, discussed and influences views.

A recent brilliant graphic in the Wall Street Journal showed how the Facebook algorithm serves content to Democratic and Republican supporters. 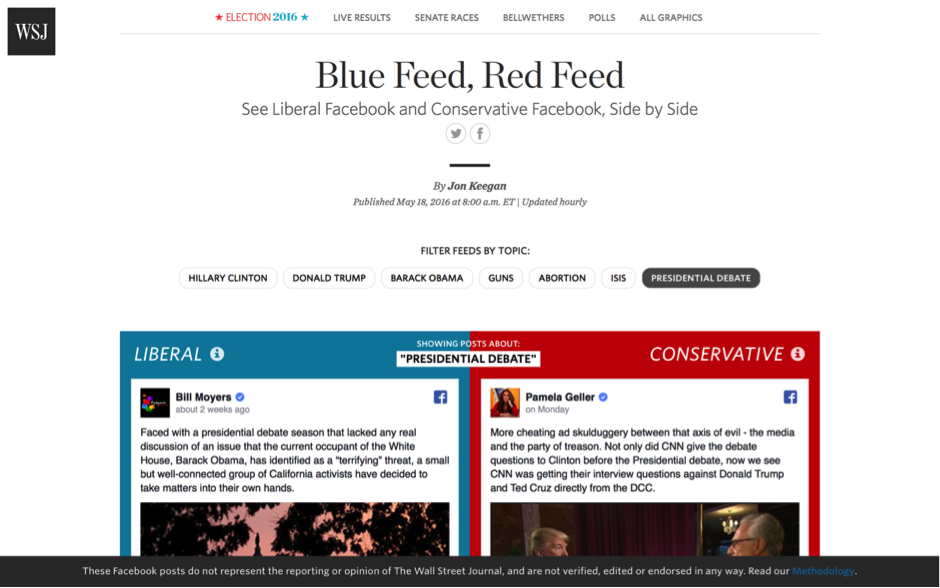 Business insight: Use social media to become your own media channel and use live streaming to help customers take action in real time.

Social media and #election2016 were enmeshed. The effects of social data, activation and information are just as powerful for the rise and fall of your business. Know what they are and how to leverage them.