Small businesses are caught up in the feud between Facebook and the federal government over a code that would see the tech platform pay for news content.

While major news sites including ABC News, 9 News, The Age and The Guardian have all had their content removed from Facebook, businesses have also been affected by the ban.

From large firms such as Harvey Norman to the small Victorian dairy business Gippsland Jersey, businesses have either had their content withdrawn or restrictions placed on what they can post.

Mia Fileman, brand director at Idiello, was barred from sharing a link to her marketing business’ website in a post this morning, when she tried to respond to a user’s request for advice in a Facebook group.

The owner of the marketing and advertising business assumes her website was banned because it has a news hub page with links to articles on Mamamia and Better Marketing.

Fileman says Facebook is yet to “iron out the kinks” about what constitutes a traditional news publication.

“I think they will sort it out, though I don’t know how long it will take,” she says.

“But again, the consequence is that small businesses are collateral damage.” 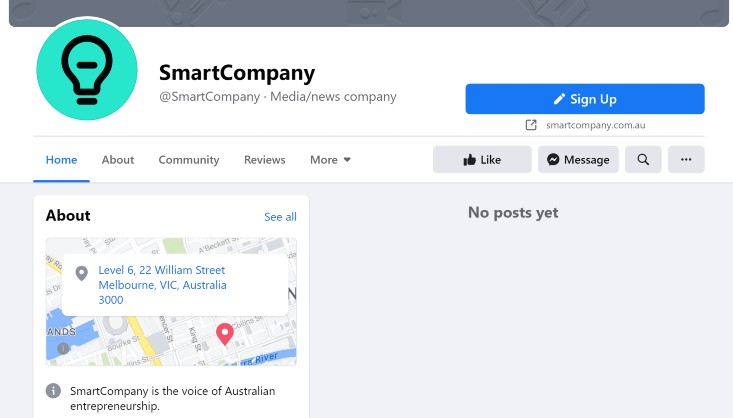 Australian and New Zealand managing director, Will Easton, said in a blog post that the “proposed law fundamentally misunderstands the relationship between our platform and publishers who use it to share news content”.

“It has left us facing a stark choice: attempt to comply with a law that ignores the realities of this relationship, or stop allowing news content on our services in Australia,” Easton said.

“With a heavy heart, we are choosing the latter.”

Changes to Sharing and Viewing News on Facebook in Australia https://t.co/ePpPWE65Ns

Under the proposed media bargaining law, large digital platforms such as Facebook and Google would be required to enter into licensing deals with news organisations or face compulsory arbitration.

The code passed the House of Representatives on Wednesday and is expected to pass the Senate next week.

Marketers are largely against the code and question why tech platforms should pay for news content — particularly if publishers benefit from using them.

Fileman agrees that news outlets benefit from Facebook and believes any code that forces the platform to pay for news content is wrong.

“I don’t agree that news outlets should be paid to be featured on Facebook,” she says.

“And where do you draw the line? Who else should be paid to be featured on a platform?”

Google previously threatened to pull its search engine from Australia over the proposed change to the Competition and Consumer Act, but has since struck licensing deals with individual publishers, including Private Media, the parent company of SmartCompany and Crikey.

Private Media, the parent company of SmartCompany, is a current participant of the Google Showcase program. Content from SmartCompany and other Private Media brands will be featured on Showcase as part of a commercial partnership.

By asking the wrong question, our corporate cops let Facebook fortify its monopoly

Australia and the United States have been waving through takeovers because the targets are small — something that’s usually good practice.

What entrepreneur Jessica Williamson has learnt since scoring a Clubhouse invite

A self-professed Clubhouse fan, Jessica Williamson shares what she's learnt since downloading the app for the first time.