Thousands of Facebook fans get behind “National Buy a Woolies $7.90 Roast Chicken Day”

A Woolworths fan page has called on Australian shoppers to support the humble roast chicken, with the much-loved dinner companion finally getting its moment in the sun.

A Facebook event called “National buy a woolies $7.90 roast chicken day” has popped up overnight, calling upon shoppers to go and purchase a roast chicken from Woolworths on October 28.

The event already has more than 1,300 people attending and a further 3,800 interested.

The event was posted by Woolworths fan page “Woolies Memes”, which regularly posts entertaining images and ‘in-jokes’ about the experience of working at the Australian supermarket giant.

The page has over 60,000 followers, and the founders of the page told SmartCompany it’s independently run and not affiliated with Woolworths marketers.

“There was no real inspiration behind [the event] apart from our love for roast chickens,” the page founders – students in their early twenties and Woolworths retail-level employees – said.

“We have run an event before (‘Walk like Peter Parker through Woolies carpark’) so it’s about the same kind of audience.” 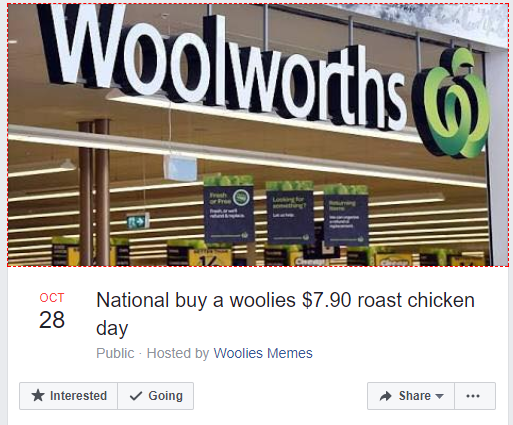 The founders of the page say they’re not expecting many punters to follow through and purchase a roast chicken on the day, but say even if “one person buys an extra one we just think that’s hilarious”.

The Woolies Memes page has only been around since late 2016, but has already amassed a sizeable audience, boasting the tagline: “Hardcore woolworths memes for fresh food teens”.

This isn’t the first Australian supermarket-related Facebook page to see success on the social platform, with the page “Dogs tied up at Coles” attracting 35,000 followers. However, the “Coles Memes” Facebook page has only 31,000 followers, half of its Woolworths counterpart.

The founders of the page say ‘Woolies Memes’ is both for a bit of a laugh, and also to drum up camaraderie between fellow Woolworths employees.

“The moderators here all work at Woolies and love what we do, but we also all see the humour in what we go through in retail and feel like a lot of people can relate to that,” they say.

The page has never had any contact with Woolworths’ head office, but the founders say the company is aware of the page, and have even commented on its images a few times.

“We find [that] really awesome,” the founders say.

SMEs could take inspiration from the roast-chicken approach

Outside of some wholesome roast chicken-related fun, social media expert and partner at Zoetic Agency Dionne Lew tells SmartCompany Australian SMEs could learn a thing or two from the actions of a fan and joke pages for brands.

“I think this is a clever way to get engagement without asking people to pass it on or having to create such incredibly creative content that people long to share,” Lew says.

“Events pop up differently in the feed from sponsored content which makes them stand out more, and the other pros of events is that Facebook will automatically send a reminder and show which friends are going, so it makes it easy to share and talk about ahead of the day of the event.”

Despite acknowledging most SMEs won’t have the reach of a 60,000-strong fan page associated with a recognised brand such as Woolworths, she believes many niche markets have “very strongly engaged communities” and says SMEs can “learn a lot” from these examples.

“You can build a strongly engaged audience around anything that people are passionate about,” she says.

“I also like the idea of a cheap chicken as an event rather than just a thing, it’s a differentiator, you make it a day rather than a product; an idea, rather than a chook.”

“I mean – when else to chickens inspire talkability?”

SmartCompany contacted Woolworths. The company had no comment to provide, but did say it is not associated with the page in any way.