Facebook looks set to add a CV function, but will employers and job seekers embrace the idea?

Facebook is continuing its quest to be the one website to rule them all with reports it is trialling a CV function for job candidates.

But digital communications experts question just how popular the resume feature will be.

Social media director for The Next Web, Matt Navarra, tweeted screenshots this week from a web developer who tipped him off to the new function popping up on her profile.

The feature appears to include sections for individuals to share their work experience, education history and personal contact details. 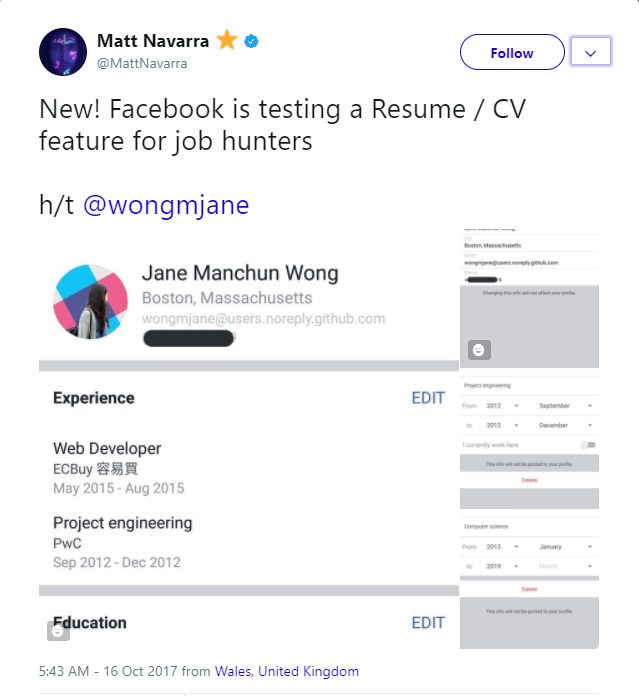 When asked for further details on the feature, Facebook Australia confirmed to SmartCompany “we’re always building and testing new products and services. We’re currently testing a work histories feature to continue to help people find and businesses hire for jobs on Facebook.”

It’s not currently clear whether this function would sit within a user’s personal profile or separate to it, but the social platform appears to be moving in on a space currently dominated by LinkedIn.

Earlier this year, Facebook also rolled out an updated Job Board feature, encouraging businesses to share roles throughout their Facebook networks, as a low-cost option for advertising roles to candidates already familiar with the business.

Meanwhile, LinkedIn has also been introducing features that mimic other social platforms of late, including the option for users to easily share video across their networks.

In a world concerned about data security and privacy, however, the idea of bringing recruitment into the personal world of Facebook might not be too appealing to job candidates at this stage, says social media expert Dionne Lew.

“There have been quite a few issues with Facebook lately around it not properly monitoring fake advertising and fake news on its site, for example,” Lew says.

“And I think Facebook has been quite slow to respond to these concerns.”

In response to the news, some job hunters said they would never bring employers to their Facebook profiles, no matter whether their professional and personal profiles were separate.

You know if I am applying for jobs, I sure as heck are not going to link my Facebook. Not that I have anything to hide, but still

Given Facebook users already have some anxieties about the security of their information, Lew says the idea of businesses recruiting through the platform might take a while to catch on.

“On LinkedIn, people are comfortable with sharing details because it’s a peer-to-peer network. That’s not going to cross over as much into Facebook,” she says.

Is this a chance for LinkedIn to promote itself?

Lew says the race is on for all social media platforms to become a “one-stop shop” for users, because despite the millions of websites in existence, consumers tend to return to five or so sites or platforms throughout the course of their daily lives.

Facebook will continue to roll out features to further increase the stickiness of the site, but Lew believes the company’s foray into recruitment does give its competitor LinkedIn a chance to position itself as the safer professional option for businesses and workers.

“I think it’s not even just moral grey areas that are posed here [from professional information on Facebook], it’s also legal issues,” she says.

While it’s still not clear whether professional information will be housed separately to personal information on Facebook if this CV function is rolled out widely, Lew says employers will be wary about making judgments on candidates based on what they learn about their lives through Facebook profiles.

“For example, there have been employers who have trawled Facebook and made decisions based on that,” she says.

“I think there’s an opportunity for LinkedIn here, because they have not suffered from the same issues.”

Facebook has increasingly looked to be a place where businesses and employees can interact, launching products such collaboration platform Facebook Workplace.

Lew says there are plenty of “brilliant” opportunities for businesses to do work through Facebook, but on the recruitment side, it will be a matter of ensuring candidates and businesses feel comfortable about diving into the personal world of the platform.

“You’ve got people increasingly concerned about privacy at the moment, and that’s the thing,” she says.