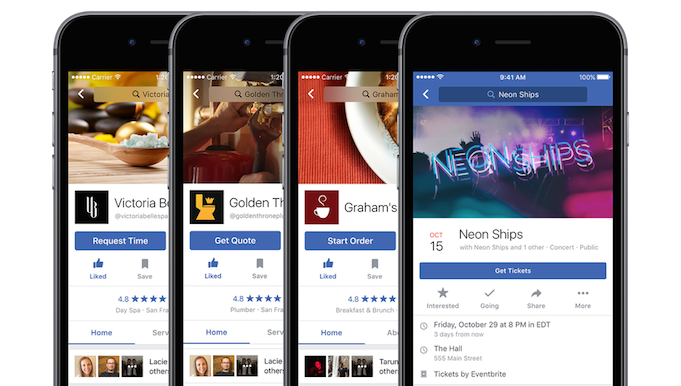 Facebook will soon allow users in the US to order food, buy tickets and book appointments directly from business Facebook pages and social media experts predict the new functions will be available in Australia before the end of the year.

Facebook yesterday introduced a series of features to US users that are designed to help individuals “connect with local businesses in easier and faster ways” and to get recommendations from their friends.

Read more: What you need to know about Facebook Workplace

Users will now be able to order takeaway food directly from a restaurant’s Facebook page if that business is using delivery services Slice and Delivery.com.

Businesses that take appointments, such as hairdressing salons, will be able to take those bookings directly from users on Facebook, with the ability to confirm the appointment via Facebook Messenger.

Other businesses will be able to add a “Get Quote” button to their Facebook page, which will allow potential customers to instantly request a quote from the business, while a partnership with Ticketmaster and Eventbrite will mean Facebook users that are interested in an event will be able to purchase tickets directly from an event’s page.

Small businesses may also benefit from the social network’s new Recommendations tool, which will map and save recommendations made between friends and family members.

“If you turn on the feature, your friends can comment on your post with suggestions, and you’ll see all of them mapped out and saved in one place. You can also go to your Recommendations bookmark on Facebook to ask a new question or help your friends.”

Facebook said the features will initially be rolled out in the US as “the first step” and a spokesperson for the company told SmartCompany this morning Facebook does not “have any firm plans to share around international expansion yet”.

“As with many of our products, we generally roll out and start testing in one territory first so we can work to make it a good experience for consumers and businesses before we expand further,” the spokesperson says.

Lucio Ribeiro, head of strategy and delivery at Online Circle Digital, told SmartCompany he expects Facebook will spend a few weeks testing the functions in the US market before quickly rolling out the features to other English-speaking markets, based on how the company has previously rolled out its updates.

“We can expect it quite fast, perhaps before the end of the year,” he says.

“Platforms are global … [Facebook has] 1.7 billion users and [is] morphing all the time,” she says.

How the features will help businesses

For Ribeiro, the ability for businesses to sell tickets to events directly through Facebook has the potential to become a “very powerful” feature.

With scores of Australians already using the Events function on Facebook to indicate their interest in attending events, Ribeiro says by allowing direct tickets sales Facebook is “eliminating the friction” many people experience when having to use multiple platforms to find out about, and then book tickets for, an event. By making the process easier for users, he says Facebook could become “the most popular events promoter”.

While the ticketing function is rolling out to the US first, Ribeiro believes Facebook has already begun changing its algorithm in the Australian market to give events more prominence and as a result, small and medium businesses should start experimenting with the function, if they are not already doing so.

“Absolutely take the first step by setting up events right now,” he says.

“Regardless of if this change is rolled out quickly or not, it’s an opportunity to learn how to do it.”

The appointment-booking function included in the suite of new features is also another signal to businesses of the growing significance of Facebook Messenger, says Riberio.

“Businesses should really be in sync and paying attention to the rise of Messenger,” he says.

“It’s the new customer service channel and a channel for sales … Facebook is really putting money and attention into developing it.”

Both Ribeiro and Lew say one of Facebook’s key aims to user retention. As Ribeiro explains, “if you spend one minute on Facebook, you’re not spending that one minute on Google”.

“Platforms and apps are trying to make sure that once you’re there, you can do what you need from within the platform,” says Lew.

“We’ll see more and more of this.”

These kinds of direct interactions also give Facebook data about its users, which can then feed into the platform’s commercial model, Ribeiro says.