Fake Facebook customer support lines are catching out unsuspecting users: Are you safe from scams?

A number of fake Facebook customer support lines are reportedly scamming customers in the US, and a similar trend appears to be emerging in Australia.

Unlike many prominent information technology companies, Facebook does not have a dedicated customer support phone line, and instead only provides support through its online help centre.

Unfortunately, many Facebook users do not know this and are being tricked into calling fake support lines with the belief they are contacting Facebook.

According to NPR, the top result in a Google search for “Facebook customer service” is a false customer service line. When a customer calls this number, a call centre operator pretending to be from Facebook provides the caller with “support”.

Except, the “support” provided involves directions for the user to go and buy an iTunes gift card voucher, and provide the false Facebook representative with the activation code.

This is a common online scam that is used as a way to extort money from unsuspecting victims in an untraceable way. Apple warns against this scam on its website, noting iTunes gift cards can only be used to purchase goods from Apple’s online store.

Throwing the term “Facebook customer service Australia” into Google reveals a phone number as the first result, with Facebook’s legitimate help centre as the second. The third and fourth results also claim to provide support to Facebook customers via phone. 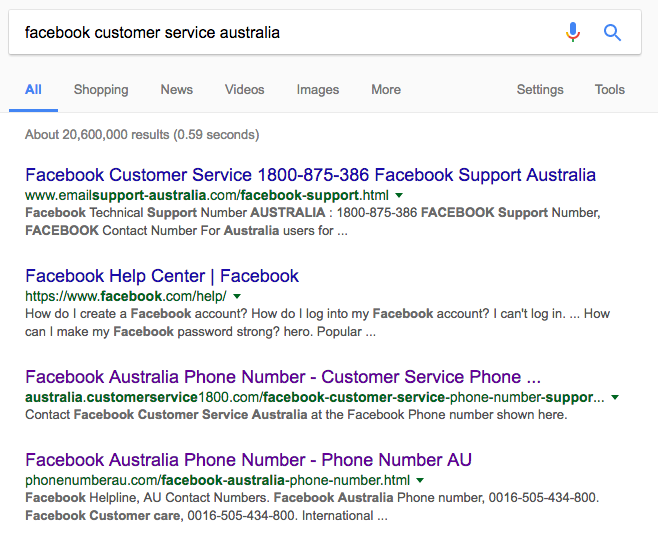 When calling one of these numbers this morning, SmartCompany spoke to a customer service representative that claimed to “provide support for Facebook”, but said they are not associated with the company.

After being asked for an email address and date of birth, the representative said the account in question had been compromised. In order to receive access and be able to log in again, a $150 fee would have to be paid for special security software.

A spokesperson for Facebook told SmartCompany these types of scams target a broad range of brands, and it works with other affected companies to attempt to stamp out the practices.

“While these groups are persistent and work continuously to spread false information, we have taken down a large number of the sites offering fake support numbers and we will continue to do so,” the spokesperson said.

While this scam is different to the iTunes method employed in the US, Michael McKinnon, a cyber security expert at Sense of Security, believes it’s likely to be just as effective.

“There’s always the same formula for these things. If they’re in business and still doing this, it’s likely a profitable scam,” McKinnon told SmartCompany.

“There must be people falling for it if it exists, there’s a significant cost associated with registering 1800 numbers and web addresses.”

However, McKinnon says these scams are not only targeting Facebook.

“It’s a problem with a lot of major tech companies where people are often looking for technical help,” he says.

“If someone’s account actually gets hacked, they will be more motivated to seek technical support and more likely to pay for fake software.”

These scams are in line with another batch of Facebook scams, which McKinnon calls the current “flavour of the month”. These scams involve scammers setting up clone accounts of friends and family, impersonating them and penetrating friend networks.

The scammer will then send out virus links en-masse, or attempt to extort money, says McKinnon.

“The reports I’ve seen show these scammers connecting through messenger and pretending to be stuck somewhere and in need of money,” he says.