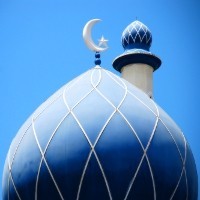 More Australian companies are facing an online backlash over halal-certified products in an organised attack by a network of anti-Islam groups.

The impact on businesses caught in the crossfire can be significant. Just who are these groups, what is their beef with halal products and are their claims true – or is this just a campaign of misinformation?

Holt described the decision by South Australian dairy manufacturer The Fleurieu Milk and Yoghurt Company to drop its halal certification in the face of online criticism last weekend as a “success”.

“Absolutely, it’s the first time we’ve actually had a company say it’s because of all the pressure we have decided to stop,” says Holt.

Holt, a former One Nation candidate, says Restore Australia has been the main group to promote the halal boycott and is working in collaboration with Facebook groups, including the prominent page Boycott Halal Australia, to make an organised attack on companies using halal products.

“What we do is target companies and if we coordinate that protest, it has much bigger effect. They start to see all backlash against it,” says Holt.

While Holt says Restore Australia is not directly involved in the administration of that page, he says he is in frequent communication with its organisers.

Many of the companies on the list have seen a rise in posts from anti-halal supporters in recent weeks, including Red Rooster, which has responded to complaints saying its products are not halal certified and has “no plans to become halal-certified”, and Four’n Twenty Pies, which defended its pie range as including less than 5% halal-certified products.

In recent weeks, a number of businesses have spoken out about the online abuse they have received over halal products. Police were called in to investigate threats made against the Byron Bay Cookie Company over its halal-certified biscuits.

What’s the problem with halal?

Holt claims one of the main issues with halal certification is that products are not clearly labelled, so it is difficult for Australian consumers to choose not to buy them.

But he says, “Even if there were clear labelling, we would still be against it,” because he sees the certification as “a religious tax and, Islam is not the only religion in Australia.”

Holt has previously designed a campaign against Cadbury chocolates over their halal certification. In a post on his website, Holt urges customers to buy, open and then return chocolate bars for a refund.

“We recommend saying that you found out Cadbury’s Chocolates are blessed by an Islamic imam and you cannot eat food blessed by a false god…” says the post. “Under the law, merchants MUST refund your money…and because the packaging is damaged they can’t put it back on the shelf to re-sell. They will be forced to return it to Cadbury’s Chocolate for a refund.”

When asked how successful the campaign was, Holt told SmartCompany Cadbury has been forced to up its advertising budget and close its Tasmanian factory for several weeks as a direct result.

“We don’t want to hurt Australian businesses, but if they betray Australia, we will tell them,” says Holt.

Holt, like many of the anti-halal posters on social media, says some of the money paid by companies for halal certification goes directly to funding terrorist organisations.

When asked if he had any concrete proof of this claim, Holt says, “We have concrete evidence from Canada, where they have followed the money trail. Boycott Halal has argued the Muslim Association of Canada is a contributor to Hamas Fund Collector.

A campaign of misinformation

But James Mathews, spokesperson for the Australian Food & Grocery Council, tells SmartCompany halal certification is undertaken by accredited religious organisations, all audited by the Federal Police.

“This campaign is one of misinformation,” says Mathews, who likens the certification process to gaining ‘organic’ status for a product.

“Companies that are said to be ‘funding terrorists’ – well, their funding is something that is subject to investigation under Australian law.”

“We have a proper system in place to identify and detect if someone is doing the wrong thing,” says Khan. “There is no point of the claim that we are funding terrorism.”

Halal Australia charges a non-refundable one-off application fee of $110.00 for a site to apply to be halal certified, and $55.00 for each additional site. The process involves the company providing documents for assessment and then a site visit, to check if the site and products meet the criteria for halal certification.

“We are trying to facilitate this process to help the company make extra revenue,” he says.

Khan says many of his clients look to halal certification to tap into overseas markets, particularly for catering contracts with international airlines.

This story continues on page 2. Please click button below.

I think you guys are pretty one eyed when talking about Halal. Check out what is behind halal certification. Dont just believe that raving of one person. That one person has told several senators to stay away from halal.
Anyhow, Halal is a precursor to Sharia Law.
It also makes the animal rights people very angry in regards to the inhumane slaughter methods.

Why should we have to pay the halal tax when only moslems require it and to tell the truth not even they need it.

Lots more questions but I guess being one sided you are not interested in facts.