In the not too distant future, I’m pretty sure university lecturers in communications will be teaching their students how not to do crisis communications using the actions of major Australian retailer Harvey Norman this week.

The self-inflicted PR nightmare for the retailer has been simmering for weeks when unions, politicians, customers and employees called the company out for holding on to more than $20.5 million in JobKeeper handouts after record profits during the pandemic.

Harvey Norman’s PR team had an additional challenge when the company chair, Gerry Harvey, started actively lobbying to freeze an increase to the minimum wage for his workers as his company pocketed more than $462 million over just six months in 2020 — more than double its profits.

And how did the company respond to its critics?

By throwing every lesson in crisis communications out the window.

It started by belittling people on Twitter, including a former employee who raised serious mental health concerns after working at the company, by responding with a face-palm and waving emoji. 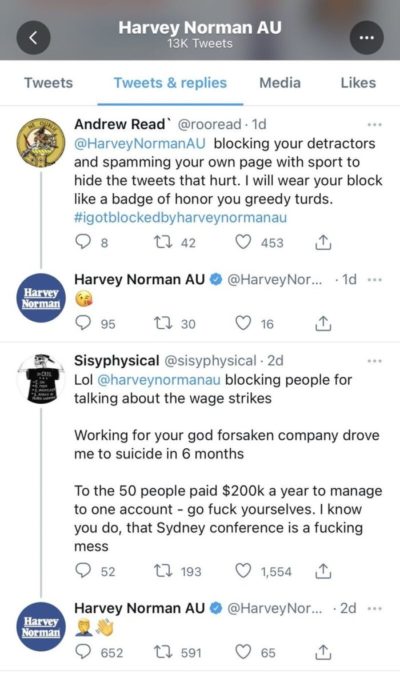 Then it started blocking followers en masse, before finally deleting their account entirely and ignoring any questions or calls for comment.

Except for the bizarre blocking and mocking spree on Twitter, the company has been silent across all its channels, leaving the public to tear it’s reputation to shreds.

If there’s going to be any way out of this mess, we’re thinking Mr Harvey might need a crash course on how to handle a communications disaster.

Harvey Norman is trending (for all the wrong reasons)

Lesson one in reputation management, if you don’t understand your stakeholders, (or worse, ignore or actively mock them) you will create damage, sometimes to the point of irrepair. They will quickly become confused, angry and react negatively. The impact to your financial and reputational bottom line will be more severe, and the length of time to resolve the issue will be extended — often dramatically.

Case in point: the hashtag #boycottharveynorman trended on the platform this week with hundreds of customers and employees calling the company out for corporate greed and its abysmal behaviour both off and online.

Lesson two: recognise when operational improvements are necessary and be transparent about how you’re solving the situation.

With no statement, no press conference and no actions taken to remedy the situation, we’ve been left with no choice but to assume guilt.

The disaster worsened when politicians, media outlets and high-profile Aussies like popular comedian Celeste Barber joined the boycott before getting blocked by the company.

The Tasmanian Times ran a meme competition to call out Harvey Norman’s corporate greed after it was blocked for simply reporting on the protests.

“We have been blocked on this platform by @harveynormanau for reporting on an event that occurred outside their Hobart store today,” the Times tweeted.

“This is is just petty and silly. Exactly what HN thinks they can achieve is, well, mystifying.”

The golden rule of managing PR disasters that Harvey Norman failed to learn was to take responsibility. Businesses in this situation need to control the message by reacting immediately and responding to feedback.

You wouldn’t think you’d have to add not mocking genuine complaints with emojis to the rulebook.

Instead of dismissing people publicly, Harvey Norman needs to acknowledge their concerns and questions, apologise and take action. There is no excuse for an ‘unmanned’ social media channel, and people expect genuine two-way communication on each platform.

In crisis communications, you can’t fall back on ‘crazy prices’ and ‘hardly normal sales’. But if you get it wrong, you might indeed watch your prices fall — it will just be your share price.

Aussie retailers and manufacturers are giving mining, property and tech billionaires a run for their money on this year's Rich List.

Taking business disputes to social media can have legal, reputational and financial ramifications. Here’s what to do instead

Even if you have a valid complaint about another brand or business, venting on social media should be a last resort.

The reality is no-one really cares.

People stupid enough to think a business cares or does anything other than profit is just as stupid as the people who are upset by an emoji post.

Clearly the context of the emoji is entirely missed by many – it’s obvious dismissal of the equally hyperbolic comment.

Outrage everywhere.
I remember when Smart company commented on things of value.

If the PR issue is recoverable, best you explain it. Gerry Harvey is definitely an idiot, but as are the people demanding and apology and change. Or feeling pacified when they get it…

There is zero change Gerry will give the money back. So get over it.

Why don’t you try reading the article, that you appear to have completely misunderstood? It’s commenting on HN’s comms strategy, not arguing the case for a boycott. Or are you too stupid to understand, and just reflexively put on your rightwing anti-woke culture warrior cardboard cut out suit of armour? Get over it.

The PR strategy doesn’t need to worry about such stupid things and should be focusing on product releases.

That’s the job of PR. To help sell more stuff.

If people keep worrying about such trivial things then they give more power to the silly media exchange.

So I stand by the point that PR in this instance doesn’t matter and is unlikely to materially effect their bottom line.

Focusing on it is a waste of their money.

As per initial comment. The article should explain pragmatism of what PR needs to do better.

Fake apologies is not going to do much to solve that issue.

Really don’t know where you get right-wing anti woke stuff. Personal attacks (baseless at that) really are not the sign of good character or argument.

If you think PR of fake apologies or straight up lying through your teeth with whitewash nonsense is going to sell more stuff you’re delusional.

Harvey Normans entire business is built around charging too much for cheap junk while preying on low income earners with interest free fee ridden scams. I hope they vanish from the face of the earth.

I havnt shopped at hardly affordable for years, not only because of their insane pricing they also handle returns by refusing them or palming you off to a repair centre or some other garbage tactic this is in breech of Australian consumer Law and when told this they didn’t care….

Unfortunately FA will happen. People still shop there and will continue to do so. Most boomers and Gen X still think Twitter (for the most part) is a storm in a tea cup. While it is disgraceful behaviour, I cannot see Gerry Harvey being physically dragged from his mansion and hauled before the masses and placed in the public stocks with dishonoured warranty cards flung at him.
Life will go on, his share price may take a mild hit, however, the masses will still be buying their Christmas appliances there in December and next week there will be a new “outrage” for the Twitter mob to be offended by.
Financially, Gerry Harvey can hold his breath longer than a bunch of minimum wage journalists and former employees. Sad but true.

Whoa there. Don’t you dare lump Gen X in with that other generation.

Sure we think twitter wars are stupid, but mostly because we’re usually rolling our eyes at all the “boomer vs Millennial” nonsense. All of my Gen X friends are savvy enough that we never shopped at Harvey to start with. I source parts and build my own computers, specifically so I can avoid his nonsense, tyvm. Don’t need to boycott him now, because I always have. 🙂

Not Boomer or GenX and still think Twitter is a storm in a tea cup.

I totally give Harvey Norman stores a miss now. There is one nearby but if I need something they sell, well, a few extra km is not a big deal.

“Suck a Fart” love it!!! Sums my feelings up perfectly

Their prices aren’t even that great, you can do at least as well if not better elsewhere with a little effort.

Boycott his stores… I’ll never buy at Norman including on line and I also apply this stance to Amazon a low paying union hating worker crushing organisation … I hope there is a special he’ll for these awful corporations..

Laughable article Gerry made his fortune through PR PERIOD

I wonder if their SEO rankings are up because if the storm in a tea cup.

In that case they’ll actually make more money than the loss this article espoused from PR damage that is irrelevant.

Harvey Norman train their sales staff to lie & rip off customers. I haven’t stepped foot in one in years when I was checking laptop prices and sales staff laughably lied about basic stuff.

Always ignore the social media lynch mob! They’re just out to attack people and businesses for anything they can, usually just not enough wokeness to satisfy their rage. But they also contribute nothing! Well done Harvey norman, just move on from a bunch of people that don’t matter.