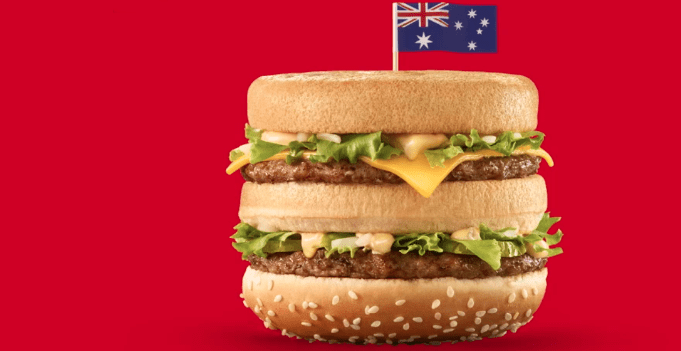 A McDonald’s Australia social media campaign has failed to gain any traction, after the fast food giant suggested Australians eat their burgers upside down.

The campaign encouraged Aussies to flip their Big Macs over and eat them from the bottom up, claiming the burger has so many local ingredients the only way to make it more Australian would be to “flip it down under”.

The campaign ran across the week of Australia Day and is still ongoing at the time of publication. Diners are encouraged to use the hashtag #downunderbigmac, which, as Mumbrella has highlighted had been very sparsely used. 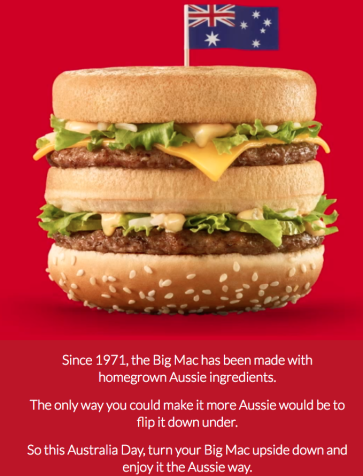 McDonald’s “Flip in Down Under” campaign.

Two of the tweets question the campaign, with one Twitter user posting a photo of McDonald’s campaign poster and saying “this can’t be a thing, can it?”

Another Twitter user said, “the only way you could make [a Big Mac] more Aussie would be to buy a burger from the local chip shop”.

After Mumbrella drew attention through its article, the reach of McDonald‘s hashtag had more than doubled, bringing the total amount of people using #bigmacdownunder to fifteen. Even McDonald’s own Australian Twitter account did not share the hashtag.

This is not the first time McDonald’s has hit a roadblock on a media campaign, coming under fire last year when it allowed users to create names for its new custom burgers.

Social media guru and director at InsideOut PR Nicole Reaney believes McDonald’s campaign failed thanks to the company not being Australian.

“Looking at the campaign a weakness is the simple fact that McDonald’s is not an Australian company, and consumers do see through a global giant seeking to tread on their cultural turf,” Reaney told SmartCompany.

Reaney notes social media campaigns work best when they reach and connect with regular active users on the platform, which McDonald’s failed to do.

“A typical ‘Big Mac’ consumer is hardly the type to turn their burger upside down, take out their phone, snap a shot and enter a 16 character hashtag on top of their post,” she says.

“On the plus side, it is a simple and fun notion – just could have been applied more effectively.”

“I don’t think people are sick of hashtags. They’re a great way to organise an overwhelming amount of online information much as we catalogue books by ‘subject’ in a library,” Lew told SmartCompany.

“Hashtags work brilliantly when they tap into something that matters to a community or makes them want to take action because it’s inspiring or fun.”

When a hashtag ties into a call to action it can see real traction, says Lew, which was what McDonald’s was trying to achieve. However, she believes the method was too complicated.

“When you unpick it, you see it’s a complex idea with a long hashtag that is actually hard to execute. First, you’ve got to flip the burger upside down then try to do a selfie, then get it off with that lengthy hashtag,” she says.

“But beyond that, why? What’s the motivation? It’s not even tied to a competition, which can be a motivator for people online.”

Lew advises businesses to try to tap into passionate issues in communities with hashtags, and employ effective calls to action for best results.

“It doesn’t have to be a political issue; it just has to get people to do something. A tweet call to action can be very effective but it’s got to be the right call to action, something people can do easily and find fun,” she says.

SmartCompany attempted to contact McDonald’s Australia but did not receive a response prior to publication.

This is a rather stark example of 20th Century advertising angles seeking to translate onto social media – this quest for endless ‘novelty’ is its own undoing. Not everything can be lumped into social media!