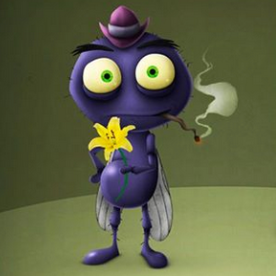 The insect repellant company posted a specially drawn cartoon yesterday in an attempt to join in the hashtag campaign which emerged in response to the murder of Stephanie Scott.

The #putoutyourdress campaign saw hundreds of people post pictures on social media of their wedding dress hanging outside their homes in recognition of Scott.

The hashtag was inspired by the #putoutyourbat movement after the death of cricketer Phil Hughes.

Mortein posted an image of Louie the Fly, with a purple vest hanging behind him.

The post read: “Even a nasty bug like me can sense it’s been a sad week for our great country. I’m putting my vest out to support ‪#‎putyourdressout. Enjoy this Sunday with your family. It’s precious.”

Tim Burrowes, founder of Mumbrella, questioned whether Scott’s murder is an acceptable topic for a business to use to drive Facebook engagement.

He described the post as “a hamfistedly cynical ploy by a British-based multinational corporation to hijack the social media conversation.”

Following his criticism and social media backlash Mortein pulled the ad this morning.

“A majority of our audience responded favorably but in hindsight it is not a conversation we should have engaged in.”

“Brands can still acknowledge things that are significant public events, but I think when you put it in an ad and you support that, you go beyond that,” she says.

“As soon as put money behind it you’re in trouble,” she says.

Gamble says in contrast, small businesses such as wedding dress designer Anna Campbell, who posted a #putoutyourdress picture of a wedding dress on Instagram can show support for the social media campaign.

“[Campbell is] acknowledging something that’s really significant and as a wedding dress maker is probably just expressing compassion,” Gamble says.

“With Louie the Fly there’s no direct relationship and it’s clear they are using it to ‘newsjack’.”

SmartCompany contacted Campbell for comment but did not receive a response prior to publication.