Facebook’s latest foray into the workplace collaboration space has the potential to change the way SMEs operate, according to one social media expert.

The social media giant first signalled its intention to build a Facebook for Work in late 2014 and in early 2015, began trials of the service, which allows businesses to access the cloud-based platform to create social networks for staff.

The service was based on an internal version of Facebook used by employees of the company itself and in a blog post overnight, Facebook said more than 1000 organisations have been using the free version of service in the past 12 months.

The service has now been renamed Facebook Workplace and from today, will be available to businesses of all sizes in all locations via desktop and mobile apps, with the price for accessing the service to be determined by the number of monthly users.

Facebook Workplace includes the same features that individual Facebook users have access to from their personal accounts, including the News Feed, Facebook Groups, direct messaging through the Chat function, the ability to translate posts, Live video, reactions, trending posts and video and audio calling.

Businesses can set up Groups for their own employees or for collaborating with other organisations, as well as access a dashboard with analytics about how the platform is being used.

According to Facebook, nearly 100,000 groups have been created by the more than 1000 organisations that have already been using the platform and the locations with the most Facebook Workplace users are India, the US, Norway, the UK and France.

‘We’ve been amazed by the breadth of the organisations who’ve embraced Workplace – from a shipping company that can now connect with their ship crews using Live video, to a bank that now uses Workplace instead of fax machines and newsletters to share updates with tis distributed bank branches,” Facebook said in a statement.

Among the organisations already using the platform are Danoe, Starbucks, Booking.com, Oxfam, YES Bank in India and the Government Technology Agency of Singapore. 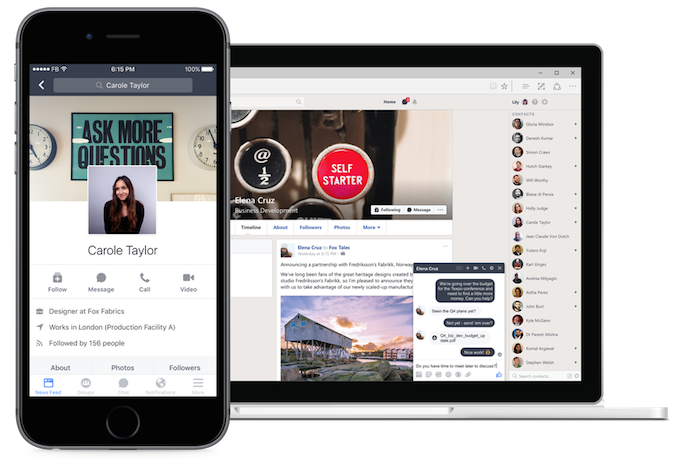 What does this mean for businesses?

With the extension of the Workplace platform, Facebook is effectively taking on other giants in the workplace collaboration software space, including Slack and Chatter, and Hipchat, which is owned by Australian tech success story Atlassian.

“The big advantage Facebook will have over everyone else, including Slack, is that they’re so integrated in so many lives,” she says.

“People are already used to using Facebook … all age groups are there and this now brings work life into it.”

“The other advantage it has is that because people already talk within it, post photos within it, read news within it, they don’t have to download a whole new environment – just extend the ability of the current one. We’ve become used to doing this with apps,” she adds.

Lew says the allowing businesses to use the platform alongside teams from other businesses makes sense as “collaboration is at the heart of innovation and modern business” and the translation features “are going to make working in different languages easier”.

“It absolutely makes sense in a mobile-first world and will allow remote workers, flexible workers and people who travel a lot as well … to remain connected in a really engaged way,” she says.

“Not just via email but through photos, documents, live videos. If you can live video with someone in Hong Kong for a quick two minutes, you get to seem them, know them, laugh with them and build real relationships. You can do a remote tour of your factory floor to stay in touch with production and wave ‘hi’ from the phone.”

However, Lew believes what will hold businesses back from realising these benefits is attitudes towards social media.

“The only thing standing in the way of this in Australia would be the mindset of corporate heads who don’t yet understand that social media is powerful and key to engagement and increased productivity,” she says.

“We’ve still got those leaders who think social is a time waster or something that needs to be scripted,” she says.

“They’re the ones who have to step back, re-examine their own headspace, look at how social is evolving and acknowledge that it’s something they want to be a part of, because it’s good for business and the risks associated, those that exist, like all business risks can be managed with the right culture and good governance.”

For many small businesses, FB Workplace provides a real way for connecting staff and creating community at work. However, for many business owners it will test their willingness to openly condone the use of Facebook at work, as there will be little to no control over personal FB usage versus Workplace usage. There is also the challenge of introducing SaaS pricing to a small business who has never paid for software as a service before, let alone something they personally use themselves for free.