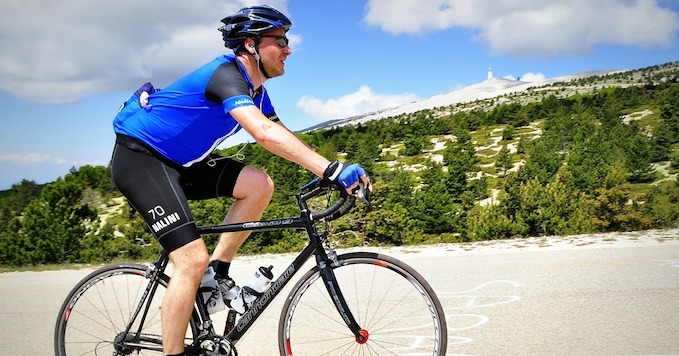 The Plough Hotel, located in Rangiora, North Canterbury, is supportive of cyclists but has no interest in the somewhat revealing elastic shorts.

Stating that the fitted shorts are inappropriate for children and the elderly, hotel co-owner Mike Saunders told the Guardian customers should not be privy to “that much detail about the shape of somebody.”

“They might find there’s enough sausages on their breakfast already,” he said.

Multiple people have taken to the hotel’s Facebook page to express their displeasure regarding the decision.

“I’m a passionate cyclist. You’ll never see me in your hotel!” said one person.

“If you don’t like it then stop staring at it. Why are you staring at someone’s junk anyway?” said another.

Saunders hoped that no customers would take it personally and “understand it’s just a dress code.”

Multiple Lycra-clad patrons, claiming they are “bulging for the Plough Hotel”, have posed photos with one sign that brightly displays “No Lycra Shorts”.

The sign is reminiscent of one displayed outside of Castle Rock Café, a Canterbury establishment that banned Lycra in 2013.

Customers wearing long tights or yoga pants should “look in a mirror first or ask a good friend,” according to the sign, while bold wearers of stubby shorts are “just ok.”

The hotel has stood staunchly by its decision, offering no apology on its Facebook page, instead posting a photo of the 1910 Dunedin cycling club, appropriately Lycra-free.

“There’s some people in New Zealand now who have grown up disconnected from bicycles, have no understanding of what it is to get out there and ride and see the scenery, they are interested in getting in their car and driving place to place.”

Some locals have expressed support for the policy change, one stating: “Good for you. Who wants to see some guy’s privates bulging in Lycra while eating?”

But many customers are confused about the overall Lycra ban, wondering why both men and women are included in the ban, given one gender’s lack of offensive bulges.

One suggested that the owners establish a general dress code, claiming

“There are many non-cycling people in public spaces who look unappetising.”

In August last year, a Sydney pub took down its Facebook page, after angry customers flooded the business with complaints about an update to the venue’s dress code that banned patrons in trade-work gear.

It is about time that there was a stance taken – the majority of these person have a pretend male fantasy about Tour de France and just need a reality check and an inflated sense of privilege on the roads – just wear a pair of shorts over the lycra and all’s good – just don’t want to scare the kids, frighten the pets in the neighbourhood and lose my appetite at the buffet for sagging bums, sallow jowls, bulging junk perhaps stuffed with sock for effect and held together by lycra – seen the latest ad regarding the damage that lycra can inflict on male junk – every day brings a crowd of lycra clad bikers past our residence talking at the top of their voices about their insignificant lives at 5am – who cares show some consideration and I am bike rider who uses a bike to commute – almost seem to think that lycra makes them a super hero and the reasonable rules of community do not apply

Reminiscent of the sign from Castle Rock Cafe? Mike Saunders was the founder of that cafe… this is just another attempt at getting free advertising, as his hotel now serves meals during the day. Media took it hook, line and sinker…