The owner of a Western Australian zoo has spoken out about the difficulties small business owners face when confronted with negative, at at times unfounded, complaints on social media.

David Cobbold, the owner of Peel Zoo in Western Australia, found himself in the news this week after choosing to defend his business through a series of fiery messages on social media, and challenge the adage that “the customer is always right”.

The incident began when a complaining customer sent an “antagonistic” complaint to the business via Facebook.

WA resident Dana Harrison sent a private message to the zoo’s Facebook page, stating her two young children and German au pair had visited the zoo but failed to see any animals.

“The feedback was 3/4 of the animals weren’t there and they finished looking at everything in an hour. It cost $50 for my 2 kids under 5 yrs old and my au pair to visit for an hour,” Harrison wrote in the message.

“Are the animals out at school holiday excursions or where have they gone? We will not be returning to your ‘zoo.’” 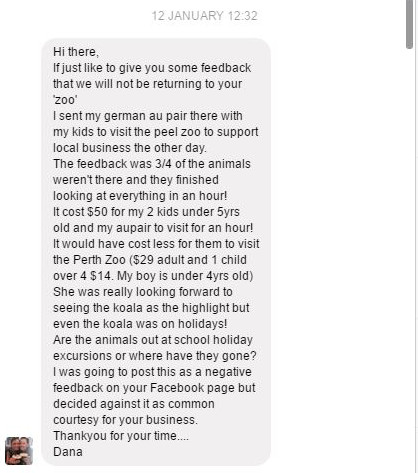 Speaking to SmartCompany this morning, Cobbold says he found the message “a little insulting”.

“I didn’t interpret this complaint as constructive criticism, the customer just wanted to have a go,” he says.

“I’m happy for anyone to interpret the messages as they see fit, but I simply did not believe her version of events.”

In a response to Harrison’s message, Cobbold challenged the complaint, claiming the au pair and children’s estimates about the number of animals present were inaccurate, reports Fairfax.

“Your reporters would need to know the total number of animals in our collection and then subtract 75%,” Cobbold wrote.

“I own the place and I don’t even know.”

Cobbold informed the unhappy customer that all but one of the zoo’s 78 enclosures had animals in them, noting they were “fully populated, often with more than one animal”.

“You have simply jumped to a conclusion because it is convenient for you to do so. The jump enables you with the feeling of self-righteous indignation that you obviously enjoy,” Cobbold wrote.

“Both conclusion and feedback are so preposterously unfounded they cross into the realm of fantasy. My own conclusion is to thank you for not ‘returning to (our) ‘zoo’.”

“I much prefer serving more intelligent creatures,” he added.

Harrison posted her interaction with Cobbold on her Facebook page and claimed Cobbold needed an “attitude adjustment”. The post, which is no longer publicly available, attracted hundreds of likes and even more comments, in support of both parties.

“I think we live in fear of social media and therefore we do pander to imbeciles,” Cobbold says.

“Businesses can’t stop them, there are too many platforms and they’re all set up to allow imbeciles to have a whinge.”

After Harrison aired the complaint via her Facebook page, Cobbold issued a response in the form of his own Facebook post, thanking followers for the “overwhelming support” he and his business were shown.

“The comments were overwhelmingly in favour of us on both our post and hers. The very next day I also had people turning up to the zoo in support for us, they were voting with their wallets,” Cobbold says.

Alongside customer support, the zoo has received a number of emails from fellow business owners praising the principle of Cobbold’s messages, and the fact the zoo owner stood by his comments.

“I didn’t just have a bad day. This woman was wrong and was being deliberately antagonistic,” he says.

Peel Zoo has five full-time employees, and Cobbold says his response was fuelled by support for his workers, saying he believes supporting your business’ staff is just as important than supporting your customers.

“Staff have to have an environment where they don’t feel threatened, and they know their boss will stand up for them,” he says.

Responding in such a way to a customer complaint is not usual practice for Cobbold and his team, with staff more often taking feedback on board in an effort to improve the business.

“At our business, there’s a pursuit of excellence. It’s part of our culture, we love our animals and we want to do the best for them,” he says.

“If someone comes up to us and says ‘I think the animals in this enclosure are baking in the sun’, we’ll go around and have a look.”

“We always want to do something better for the business otherwise what else would we be doing? I’d be sitting in my office all day.”

SmartCompany contacted Harrison but did not receive a response prior to publication.