Restaurant owner says he is under attack from “militant vegans” 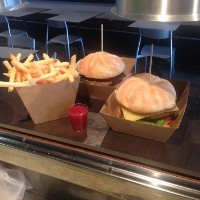 A New South Wales restaurant owner has rejected claims he is a bully after a Facebook post about a vegan customer went viral.

Earlier this week Tuk Tuk Hunter Valley co-owner Mark Clews shared a post on the burger restaurant’s Facebook page about an incident with the restaurant’s “first ever vegan”, who he said was wearing a “tie dyed T-shirt … made in a Chinese sweat shop”.

“Anyway it went as well as could be expected, she was very disappointed that we didn’t have more ‘vegan’ choices in a hamburger shop but settled on the falafel burger without yogurt and without butter,” wrote Clews.

“We informed her that the falafel pattie is cooked on the same grill as the beef, pork, lamb and chicken and therefore it may contain traces of slaughtered animals, she happily ate it anyway, guess she wasn’t that vegan after all, it’s a funny world.”

The post was quickly condemned by hundreds of Facebook commenters, but Clews didn’t back down, responding instead to one commenter that vegans are “single minded and Nazi like in their conviction”.

“They are so easy to mess with, they lack physical [sic] strength because of zero red meat in their diet! … Their veganism was inspired by some tragic childhood event, or a divorce, or a car accident, or some crap.”

“And the worst thing, from a chef’s point of view, is they cannot cook a vegetable to save their life, they are shit cooks, end of story, over and out.”

The posts have since been deleted but a Facebook group ‘Tuk Tuk Hunter Valley Honest Reviews’ has been sharing screen shots of the comments, as well as those by individuals that have apparently been deleted from the Tuk Tuk Facebook page.

But Clews has rejected claims made on the same page that he is a bully, telling SmartCompany this morning he has never bullied anyone in his life.

“I don’t believe in bullying,” says Clews. “We are about peace and harmony here.”

Clews believes the social media “attack on our meat-based business” has been “orchestrated by militant vegans” and he described the ongoing fallout on the business’ Facebook page as like a “runaway train”.

But while Clews says he has received death threats over the incident, he doesn’t believe it will have a long-term effect on his business, saying he has received numerous supportive emails from people who say they now know where Tuk Tuk is located.

“We’ve had a huge backlash from the vegan community but they were never going to eat here anyway,” he says.

“My gut feeling is that the outcome will probably be neutral, maybe improve slightly. We’ve already had between 600-700 new Facebook likes.”

But social media expert Catriona Pollard disagrees, telling SmartCompany many people are under the impression that “any publicity is good publicity” but that is simply not the case.

“You have to do everything you can, particularly with online reach, to build your reputation and maintain it,” says Pollard.

“This type of behaviour is not good for your reputation at all.”

Pollard described Tuk Tuk’s use of social media as “short sighted” and said even if there is a small number of customers who agree with the comments, a much larger group of potential customers will be turned off by the incident.

“Social media is a long-term strategy, it’s not about getting 1000 Facebook likes tomorrow … it’s actually about building the business by using word-of-mouth and using that power positively,” she says.

Q: How do you know someone is vegan?