SBS reporter sacked for “despicable” Anzac Day tweets: Why you can fire an employee for social media use 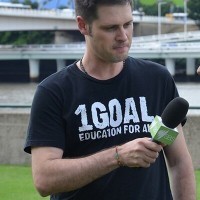 Public broadcaster SBS has acted swiftly to sack an employee it says breached both its code of conduct and social media policy by making “highly inappropriate and disrespectful” comments on social media.

In the latest instance of a worker losing their job because of what they said on Twitter, the broadcaster fired sports reporter Scott McIntyre for five tweets he sent on Saturday evening.

The tweets, which are still accessible from McIntyre’s Twitter profile, referred to, among other things, the “execution, widespread rape and theft committed by these ‘brave’ Anzacs in Egypt, Palestine and Japan”.

“Wonder if the poorly-read, largely white, nationalist drinkers and gamblers pause today to consider the horror that all mankind suffered,” McIntyre tweeted.

Two of the tweets referenced to the 1945 bombings in Hiroshima and Nagasaki, which McIntyre called “the largest single-day terrorist attacks in history”.

Innocent children, on the way to school, murdered. Their shadows seared into the concrete of Hiroshima. pic.twitter.com/DQOGXiKxEb

Remembering the summary execution, widespread rape and theft committed by these ‘brave’ Anzacs in Egypt, Palestine and Japan.

Wonder if the poorly-read, largely white, nationalist drinkers and gamblers pause today to consider the horror that all mankind suffered.

The cultification of an imperialist invasion of a foreign nation that Australia had no quarrel with is against all ideals of modern society.

The tweets were condemned by many Twitter users, including federal Communications Minister Malcolm Turnbull, who called them “despicable remarks”.

Difficult to think of more offensive or inappropriate comments than those by @mcintinhos. Despicable remarks which deserve to be condemned.

SBS managing director Michael Ebeid condemned the tweets on Saturday night as “disrespectful and not at all the views of SBS” and on Sunday afternoon tweeted a link to a statement saying McIntyre’s employment had been terminated.

“Respect for Australian audiences is paramount at SBS,” said Ebeid and SBS director of sport Ken Shipp in the joint statement.

“Late on Anzac Day, sports presenter Scott McIntyre made highly inappropriate and disrespectful comments via his Twitter account which have caused his on-air position at SBS to become untenable.”

“Mr McIntyre’s actions have breached the SBS Code of Conduct and social media policy and as a result, SBS has taken decisive action to terminate Mr McIntyre’s position at SBS, with immediate effect.”

“At SBS, employees on and off air are encouraged to participate in social media, however maintaining the integrity of the network and audience trust is vital. It is unfortunate that on this very important occasion, Mr McIntyre’s comments have compromised both.”

Ebeid and Shipp apologised for any offence caused by the comments and said the comments “in no way reflect the views of the network”.

“SBS supports our Anzacs and has devoted unprecedented resources to coverage of the 100th anniversary of the Gallipoli landings,” they said.

The SBS social media policy is publicly available. The policy includes a number of “key principles” employees should follow when using social media for either work or personal use, including to “treat everyone with honesty, respect, fairness, courtesy and sensitivity” and that social media postings are “always communicated in line with SBS’ values: creativity, collaboration, diversity and respect”.

“When communicating in either a professional or personal manner do not act in ways likely to bring yourself or SBS into disrepute,” SBS states.

Andrew Douglas, workplace lawyer and principal at M+K Lawyers, told SmartCompany “what SBS is defending is their brand”.

Douglas describes the values of a business or organisation as the “inward looking” reflection of that business or organisation’s brand and if there is a social media policy, a clear code of conduct and transparency, “if people do things, whether on social media or otherwise and either inside or outside of working hours, which damage that brand or breach those values, they can be disciplined”.

Douglas points to a 2010 case involving Boags beer, in which an employee was found to be driving under the influence of alcohol outside of work hours. Because Boags’ brand was based on drinking responsibly, Douglas says the employee was able to be terminated.

Douglas also says other recent cases have highlighted “anything on social media that is visible during work hours, irrespective of where it was created, can be considered workplace behaviour”.

“This is a prime example,” Douglas says.

“It was tweeted during a time, and the tweet was still alive, during a time when people are watching SBS so it can be considered workplace behaviour.”

While Douglas says this case is not necessarily concluded, as McIntyre could potentially make a claim against SBS for the termination, he says a business faced with similar conduct from an employee “would struggle” to take appropriate action if they did not have an explicit social media policy and a clear understanding of the policy throughout all of its policies and procedures.