“The point most of you dicks miss is…”: Small business owner grilled over “narcissistic” and “unprofessional” Facebook rant 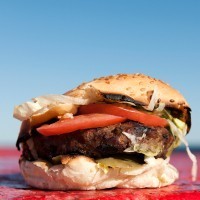 The owner of a small business in New Zealand has come under fire on social media after he took a customer’s private complaint and plastered it on his Facebook page.

Mike Duffy, the owner of burger bar Ekim Burgers, recently received a private message from a customer informing him that her son was sick after eating an avocado burger with bacon.

“Just want you to be aware,” the customer wrote.

“We thought the burgers were fantastic and know it is probably a one-off.”

Despite the polite tone of the message, Duffy responded in a condescending manner before posting a screenshot of the discussion on his business’s Facebook page.

“If your son was sick I’d assume it was a lack of person hygiene but I’m not the sort of person that assumes,” he wrote.

In a follow-up rant, Duffy wrote that after 20 years in the industry he had never had someone get sick from something he cooked. The business owner also lashed out at critics who called him “narcissistic” and “unprofessional”.

“The point most of you dicks miss is… don’t point fingers unless you know for sure,” he wrote.

“Especially when it’s something as serious as a potential food poisoning outbreak. These are, as far as I’m concerned, very serious [and] harsh accusations [and] if you’re offended by my tone or the message, good! God only knows enough of you have offend me over the years with your ignorance and lack of respect for the hard working individuals that cook your meals when you don’t.”

Duffy told SmartCompany he woke up this morning to the post going viral, and was disappointed that “armchair activists” were slamming him without knowing the full story.

“There’s a fairly tough economic climate these days and people are working pretty hard but there’s not a lot of understanding of small business from customers,” he says.

Duffy says he made the Facebook post because he was sick of customers constantly trying to “undermine” his business.

Duffy’s actions have resulted in an overwhelming number of negative comments on his Facebook page, with people labelling him a “troubled young man” and in need of a “reality check”.

“Public rant in response to a private message is inappropriate… hope they go out of business.”

Another person slammed Duffy’s behaviour and said he should get someone else to represent his business on social media.

“If you think what you are doing is a good thing and now defending your actions like some type of badge of honour, then you really need a reality check,” they wrote.

“We think that Facebook and social media is different to customer service when in fact it’s not – its premise is the same,” Pollard says.

“All businesses rely on customers or readers or whoever it is we interact with, so we have to treat them with respect whether it’s in person or on social media.”

“In this case the customer did the right thing by private messaging the business owner – she could have put it on the public page but she chose to make it private. But then he tried to make the customer feel bad by putting it on the public timeline, which was not a good business decision or a good use of Facebook or social media.”

Social media strategist Dionne Kasian-Lew agrees, and says the general rule when dealing with customer complaints is to take the discussion off a public forum wherever possible.

“Social media amplifies everything,” she says.

“For small business owners, the lesson is go back to basics. You’ve got customers and you want their feedback – good and bad – and you want it delivered to you in a way you can deal with. Whenever anyone wants to go public, whether it’s a customer or an owner of a business, you need to understand the consequences of that and know it will be amplified.”

*This article was updated at 3.20pm on 1 May 2015 to include comments from Mike Duffy