Weight-loss company slams “Beach Body Ready” critics by calling them “fatties” and “terrorists”: How not to respond to customer feedback 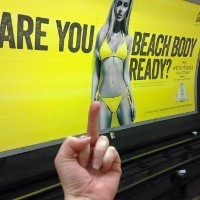 Protein World has been criticised for its “beach body ready” ads (Photo: Zusterschap)

A UK company that sells protein supplements to help its customers be “healthier, leaner, fitter and stronger” has hit out at its critics, labelling individuals who defaced its billboard as “terrorists” and calling social media users “fatties”.

Close to 50,000 people have signed an online petition against Protein World’s latest billboard advertisements, which feature an image of bikini-clad Australian model Renee Somerfield and the words: “Are you beach body ready?”

The billboards were initially brought to the public’s attention by two bloggers, Tara Costello and Fiona Longmuir, who took photos of themselves in front of the ads in bikinis and called out Protein World for its “sexist and horrendous” ads.

Individuals have also taken to defacing the billboards, which appear in the London Tube, with some telling the company to “stop encouraging women to starve themselves” and others re-writing the slogan to say “Your body is not a commodity”.

I committed an act of civil disobedience last week and it felt glorious @VagendaMagazine @EverydaySexism pic.twitter.com/4jl8vbnulU

There’s even a Facebook group called “Every Body’s Ready” Facebook page and the UK’s advertising watchdog has also been flooded with complaints, according to the petition’s organisers.

But Protein World has responded aggressively, telling one Twitter user to “grow up” and said to another: “why make your insecurities our problem”.

When that Twitter user responded by saying “because adverts like yours add to the external voices telling young girls they’re not good enough as they are”, Protein World said “and it’s ok to be fat and out of shape instead of healthy? We are a nation of sympathisers for fatties”.

Protein World chief executive Arjun Seth has also courted controversy, telling Channel 4 in the UK he will only take notice of the Change.org petition if it hits a million users. He also claims the company’s “sales have tripled and the PR department has got a bonus” since the backlash began.

“We absolutely have no intention of removing the adverts because of a minority making a lot of noise,” Seth told The Independent.

Nicole Matejic, author of the upcoming book Social Media Rules of Engagement, told SmartCompany Seth is clearly attempting to use the backlash to generate more publicity for his company, but says his remarks are “very poorly chosen” and demonstrate a “lack of audience empathy”.

“Protein World’s products clearly target women but he has been very dismissive of the backlash by saying he will only take notice of the petition once it gets to 1 million people,” she says.

“He comes across as overly sexist and against fat people.”

Matejic also questions whether Protein World’s sales really have “tripled” following the controversy and suggests Seth “show some proof” to back up that claim.

Both Matejic and social media expert Catriona Pollard say even if Protein World is seeing some increase in sales at the moment, it will only be “15 minutes of fame” and the publicity will be short-lived.

“This is just a blip,” Pollard told SmartCompany, saying business must understand they have a variety of target audiences and these audiences are usually active online.

“Dealing with a customer complaint in an aggressive manner does not build the brand positively,” Pollard says.

Pollard believes Protein World has in fact missed an “amazing opportunity” to bring many more people on board with its health message and “turn those people making negative comments into potential customers”.

“There is so much in the media at the moment about creating positive body images for women and that healthy doesn’t necessarily mean stick thin. This was an amazing opportunity for the company to explain what healthy means for women and men,” Pollard says.

SmartCompany contacted Protein World but did not receive a response prior to publication.