If your businessis using only Facebook to connect with social media users then you could be missing out on valuable customers elsewhere.

Social media channels such as Pinterest, Snapchat and Instagram continue to grow in popularity, especially among younger users who see Facebook as an almost antiquated place used mainly by their parents.

Of course, if you run a small business you’ll know all about the challenge of limited resources.

So, with only so much time and money to put into your precious digital marketing efforts, which social media networks, other than Facebook, LinkedIn or Twitter, are going to give you the best bang for your buck in 2016?

Here are five to consider:

Pinterest is widely acknowledged as the fastest-growing social media network and it passed the 100 million user mark in September.

Its growth and potential has been recognised by Wall Street as well, with Pinterest Inc raising $US367 million earlier this year, giving it a valuation of about $US11 billion.

That’s still a fair way from the $US230 billion valuation put on Facebook, but it shows that analysts believe there’s enough room in the social media space for strong secondary sites like Pinterest.

The introduction of a buy button on its mobile app in June has also signalled the intent of Pinterest to monetise its offering by smoothing the way for users to easily purchase products from the site.

Pinterest is all about aspiration. It’s very lifestyle-driven, making it a great match for brands in consumer markets such as homewares, fashion and food.

This is Social Media Examiner’s guide to marketing on Pinterest.

As with Pinterest, Instagram is very much an image-driven social network site. With an estimated 300 million active users and growing, the photo-sharing app is neck and neck with Pinterest when it comes to growth in user numbers, though Instagram still has a much larger total number of users than Pinterest.

Acquired by Facebook for the princely sum of $1 billion in 2012, Instagram relies on great photography and images to get its point across. If your brand is looking at tapping into the potential of this image-conscious site you’ll need to make sure you’re doing it with more than just stock images or fumbled iPhone shots.

Here are some tips on making your Instagram pics count from Social Media Examiner.

While parents are scrolling through their own Facebook news feeds in the evening, you’ll probably find the kids checking out their friends’ Snapchat Stories. If any social media network marks off an online generational divide at the moment, it’s Snapchat.

Much like its teenage/Millennial user base, it’s a site that’s concerned very much with the here and now. You’re going to have to keep it snappy and spontaneous if your brand is going to dive into the world of Snapchat.

Sprout Social has this beginner’s guide to Snapchat.

Polyvore is a niche social commerce site specialising in fashion and style. It’s a good example of the type of social network that is very much geared to service a specific type of user, and if your business aligns with that user, then you should definitely give Polyvore some serious thought.

The consumer-driven nature of Polyvore means it generates a high spend per user rate. People are on here to show off their own fashion flair, but they are also very keen to peruse the products and click to shop. According to figures from Shopify, among social media users Polyvore users spend the highest amount of money per order, $US 66.75.

Here is a good guide from Shopify on how to drive traffic and sales through Polyvore. 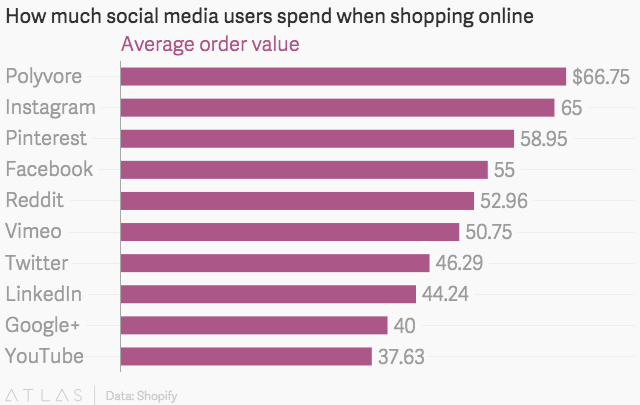 Social news network Reddit is probably a trickier place for marketers to ply their wares than most other social networks. But if you are willing to put in the time and think your company could find a spot in some of its subreddit communities, then it’s worth a look, even if its layout takes a little getting used to.

The thing with Reddit is that, unlike sites such as Pinterest, Instagram or Polyvore, there is a fair degree of antipathy to even subtle marketing efforts. Go in all guns blazing about how great your products or services are and you’ll promptly find yourself “downvoted” or even banned by moderators.

However, once you find a couple of subreddits where the interests of the users dovetail with what your company or brand is about, you might find Reddit can be a very powerful source for traffic and referrals.

Marketing Land has this handy guide for getting ready to enter the world of Reddit.