“If you attempt to enter our premises, you will be ejected”: Business bans all bloggers after feud with social media influencer

A Dublin business known for courting controversy is not backing down after banning all bloggers in the fallout of a public feud with a social media influencer who asked for free accommodation over the Valentine’s Day weekend.

The owner of the White Moose café, which operates the Charlieville lodge, announced in a Facebook post last week that bloggers were now banned, reflecting on the “sense of entitlement” from the blogging community around what expect for free from businesses. 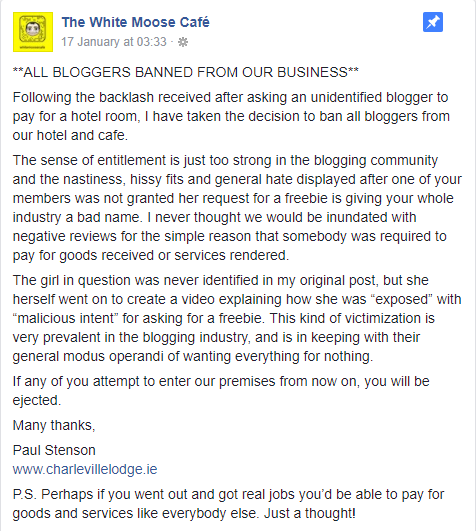 The decision was made after a feud started when a social media influencer emailed the business asking for accommodation over Valentine’s Day in exchange for the business being featured on her channels.

The business published her email with an open letter, saying “it takes a lot of balls to send an email like that, if not much self-respect and dignity”. 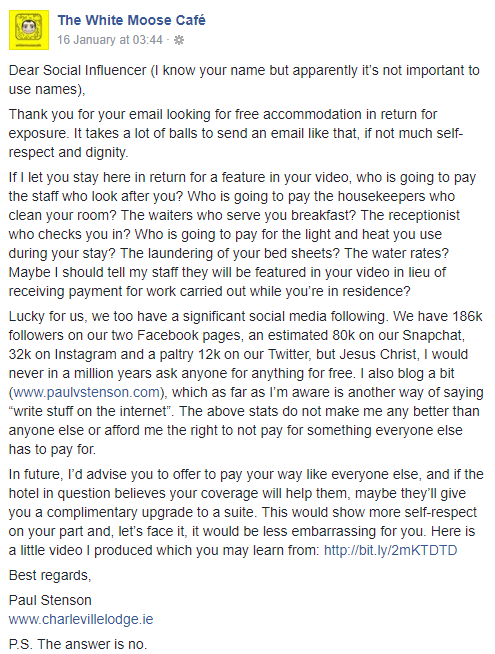 “If I let you stay here in return for a feature in your video, who is going to pay the staff who look after you?” owner Paul Stenson asked.

At the time, the business did not name the influencer — but the woman, Elle Darby, then published a video outing herself and explaining how embarrassed she was by the response.

After Darby posted her video, White Moose said it received negative reviews from those believing the business should not have been so harsh in its rejection of an influencer pitch, which led the business to call it a day on interacting with influencers in future.

The Irish Times reports the White Moose café has never been afraid to use controversy to get coverage, with the business previously also banning vegans.

In a Facebook post, the business says the feud displays how social media influencers want “everything for nothing”.

However, social media expert and director of CP Communications Catriona Pollard says while the business has got attention in this case, it’s important not to “throw the baby out with the bathwater”.

“It can be frustrating when you’re constantly being asked to give out free products, but social media influencers are here to stay — so it is important to work influencers into your strategy,” she says.

“Stop and think” before going public with criticism

Emotions run high when it comes to influencers asking for free products, says Pollard, but the biggest problem for businesses of all sizes is they don’t know what they want out of influencers in the first place.

“From a brand perspective, you should really have clear guidelines on how you use them,” she says.

Whether a business is cynical about the entitlement level of bloggers or not, Pollard says the fact is there is a big pool of social media users who can positively affect your brand — if you know how to use them.

“I think businesses are starting to understand the importance of strategy, but the amount of time and energy it takes to manage it,” she says.

Sitting down and working out “who you are willing to start a relationship with” is important, even if your policy is to never give out free products to influencers, she says.

“Absolutely it feels good to lash out, but only momentarily,” Hogan says.

She warns that publicly banning any one group from a business could have longer term negative impacts, or be a waste of energy.

“Stop and think about what the possible ramifications might be of that momentary, feel-good lash out,” she recommends.

When a business calls out a customer publicly, they risk an ongoing “war of escalation” that removes the focus from other parts of the brand and business, Hogan says.

“The business might be perfectly within it’s right to say no, or ‘we’re sick and tired of this’, but you can end up in a situation of ‘who can be more offended’,” she warns.

It’s not just travel bloggers that ask for free stuff. Just ask lots of designers, marketers, photographers, web devs – ‘it’s just a line of code’, etc who get hit up for their services for free all the time. Gotta say, it’s kind of hard not to agree with the owner’s view.

I hardly saw the lodge’s initial response as “lashing out”. The points he made were all very reasonable! And as another responder noted, creatives are asked for pro bono work all the time for “exposure”. Exposure does not pay the bills! I think it’s extremely presumptuous to ask for freebies – particularly on a busy holiday weekend. Applause to him for standing up on behalf of his hard working staff!

Not hard to see where the author’s bias lies. What’s not mentioned here is how Ms Darby rallied the troops to attack Mr Stenson’s business in retaliation. A quick look at his site shows a picture of an Aldi employee calling him a c**t etc. That’s one example. Mr Stenson has since been widely lauded for his stance, something not mentioned at all in the article.

This is not a one off occurrence. Agencies and influencers might think they have a use but I’ve witnessed many a bully behind the scenes when a business simply cannot financially afford to satisfy a blogger/influencer’s demands.

Personally, I find them a blight and something I hope industry continues to reject (as a lot of businesses are starting to do). The vast majority do not have a wide life experience, are not experienced or polished writers but are adept at the cult of personality. They expect to be catered to and don’t like being told no.

Smart Company is delusional if it thinks businesses need influencers.