Thousands of Facebook users have been caught up in the latest attempt by scammers to impersonate supermarket giant Woolworths, after a fake Facebook page offered shoppers the chance to receive a free box of groceries if they shared a post on the social media platform.

Close to 9400 people shared one version of the post, which featured a photo of Woolworths CEO Brad Banducci alongside an image of what appears to be a large number of cardboard boxes filled with groceries. 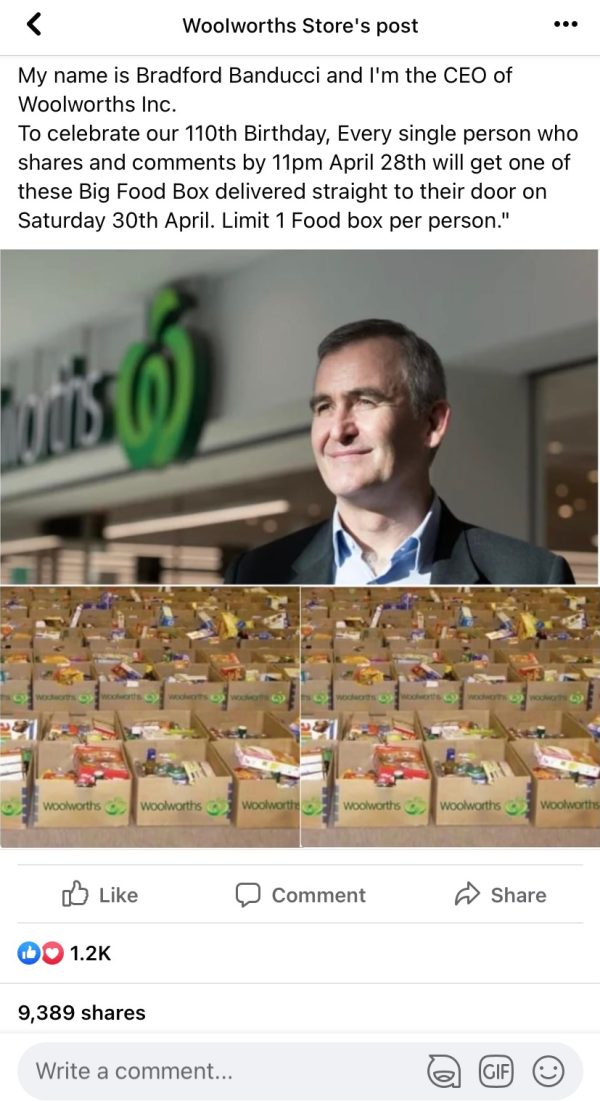 “To celebrate our 110th Birthday, Every single person who shares and comments by 11pm April 28th will get one of these Big Food Box delivered straight to their door on Saturday 30th April. Limit 1 Food box per person,” read the now-deleted post.

The images were posted by an unverified page called ‘Woolworths store’, which was created on April 26, 2022. At the time of writing, the page had 315 people following it, which is a fraction of the 1.2 million that follow the official Woolworths Facebook page.

Another version of the same post was published on Tuesday evening. At the time of writing, it had attracted 455 comments and been shared more than 1000 times.

Woolworths was founded in September 1924, which means even the claim about the company’s birthday is false.

A spokesperson for Woolworths confirmed to SmartCompany that the posts are not affiliated with the company in any way, and Woolworths is working with Facebook to have the fake page taken down.

“Social media scams seek to imitate well-known brands to collect personal information, however, we would never ask our customers for their personal or banking details in unsolicited communications,” they added.

Woolworths has updated its Scam Alerts page with details about this Facebook scam, and customers can also contact Woolworths directly by emailing hoax@woolworths.com.au to confirm whether messages are legitimate.

According to the Australian Competition and Consumer Commission’s Scamwatch, Australians have lost more than $167 million to scams already this year, with Scamwatch receiving more than 55,000 scam reports from members of the public. Of the scams reported, 11.8% have involved some financial loss.

Phishing scams have been the most commonly reported scams this year, followed by online shopping scams, false billing scams and identity theft.

Scams can be reported via this form on the Scamwatch website.

Why the ACCC is suing Meta over crypto scam ads, and what it could mean for digital platforms if it wins

The ACCC alleges Meta failed to take sufficient steps to stop displaying scam cryptocurrency ads on Facebook in 2019, even after receiving complaints.

Woolworths yesterday issued an urgent scam alert over a branded coupon offering Facebook users $100 off their next transaction.