Would you charge guests $500 for a bad online review? US hotel owner apologises for “poor taste” policy 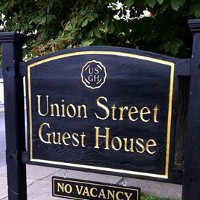 A US hotel owner has apologised for attempting to charge hotel guests $US500 ($A537) for posting bad reviews online about his business.

Union Street Guest House in Hudson, New York, came under social media fire this week when it was revealed it had a policy of deducting money from the deposits of couples if their wedding guests posted negative reviews of the venue after staying there.

The boutique hotel also said guests staying at the hotel while attending a wedding in the area would also receive a fine if they gave the venue a poor review.

According to The New York Post, the policy, which has since been taken down from the hotel’s website, specified a $US500 fine per review “on any internet site”. But customers who agreed to remove their negative review would receive a refund.

Angry customers took to Facebook and Yelp to complain about the policy, with many suggesting the way to combat bad reviews is simple: provide great service.

Owner Chris Wagoner apologised in the early hours of this morning, posting a letter to hotel guests on Facebook and offering a 10% discount to visitors who stay at the hotel in the next three months.

“I now realise this joke was made in poor taste and not at all funny,” said Wagoner. “This is no longer a policy of Union Street Guest House and we have taken it off of our website.”

Wagoner also apologised for his staff attempting to enforce the policy, which he said occurred as a result of a breakdown in communication.

“It was never my intention for anyone to pay this fine,” said Wagoner. “The instances where an attempt was made to collect the fees were a breakdown in communication between my staff and me, and for that I accept full responsibility.”

“The internet, social media and review sites are very powerful platforms and this situation has taught me valuable lessons about them,” said Wagoner, who said he is “a novice when it comes to the internet and digital communication”.

“Feedback from our guests is very important to us,” he said. “I admit that at times it can be tough to see a negative review and I could do a better job of taking that criticism in stride. We value each and every one of you and want to hear about your experience with Union Street Guest House, even if it’s a negative experience.”

Social media specialist Catriona Pollard told SmartCompany the hotel’s policy, and its response to the reaction from consumers, was “not professional in any way” and has significantly harmed the business’ reputation.

Pollard says business owners must “do everything you can so people don’t complain” and if they do, “respond to complaints and issues respectfully and professionally”.

But at the same time, Pollard says customers also need to understand that social media may not always be the best avenue for complaining to a business.

“As consumers, when we do complain, we need to recognise our words have consequences,” she says.

“Having a business where you deal with customers and negative complaints is difficult in an era where people get on a website or social media and complain without any thought about the repercussions,” says Pollard.

“And it can be annoying for business owners who, more often than note, are trying their best.”

Pollard says the other lesson to take away from this example is the importance of focusing on your customers who do have positive experiences with your brand.

“If someone has a positive experience, in every possible way, encourage that customer to post a positive review online,” she says. “Maybe there could be $500 for customers who post positive reviews.”